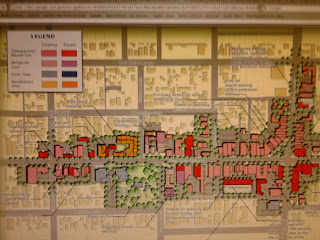 One of the big events in recent months was the release to the public of a dusty old document called the Downtown Specific Plan (DSP). And, of course, what was really new here was the Environmental Impact Statement of this DSP. Created at the cost of $250,000 to the taxpayers of our charming foothill city, this was to be the mighty design that would bring high density development to Downtown Sierra Madre. Think lots and lots of condos and boutique shops. Of course, the fact that we paid for this plan was no guarantee that we would ever actually be allowed to see it. We might not understand. No, these were highly important matters, and only the most important people were to be allowed to gaze upon it. Even certain City Council types were to be prevented from casting their profane eyes on this holiest of holies. Probably because they might talk to people like you. Or me.
That was, of course, until over 4 years later when City Council members Maryann MacGillivray, Don Watts, and Kurt Zimmerman pushed to - finally - make this report public. Something that caused Joe Mosca to memorably ask for a break during that momentous City Council meeting because he was "feeling a little distraught." Why would he feel distraught about making an old City funded study available to the people who paid for it? Read on.
But not that we should have worried ourselves back in 2004, because there was something we actually were allowed to see. According to the City of Sierra Madre Agenda Report, prepared by then City Manager John R. Gillison, this DSP was a wonderful thing that would auger in a bright new age of joy, happiness, and elevated shopping experiences to the community. And just because YOU were not allowed to see it was no reason to be the least little bit concerned. Slap on your happy face button and follow along on this primrose path as we read a passage from the fully sanitized and scented version the DSP, the one known as The Downtown Sierra Madre Specific Plan Fact Sheet:
" The Downtown Specific Plan process started in late 2004 with RBF Consulting working closely with the City to understand existing conditions in the Downtown. In early 2005, the facilitation of an extensive community involvement program began that incorporated the entire community - residents, business owners, property owners, civic leaders, local organizations, and youth - in the planning process. From this community-based planning process, a vision for Downtown emerged, which served as the foundation for the Downtown Specific Plan."
Mmm, OK. I guess only a cynic would have called what Mr. Gillison describes here a dog and pony show designed to sucker in the rubes. And we can only surmise the cost of this sad little circus. But what exactly was this "vision for downtown" that emerged from dragging all those confused citizens off to long platitudinous weekend meetings, slow walks down Sierra Madre Boulevard, and bus rides to Glendale? Mr. Gillison's version doesn't say. But could it really have been the kinds of things that we finally saw in the Environmental Impact Statement of the Downtown Specific Plan? The one that it took over 4 long years to finally emerge? Here is what the adult version of the DSP/EIR had to say:
Density: The Specific Plan allows for an increase in intensity by increasing the base maximum Floor Area Ratio (FAR) to 0.8 for commercial uses. Residential uses will be permitted at a density of 40 dwelling units per acre (DU/AC). Height limits in the Plan Area will be allowed up to 35 feet ... Under the proposed Specific Plan buildout condition, an additional 325 dwelling units will be added, along with 221,010 square feet of commercial uses. (Tattler: Seems like a lot of houses and stores for a couple of blocks, you know?)
Police: Implementation of the proposed Specific Plan could result in reduced response times or the need for additional staff, equipment or facilities. Implementation of the proposed Specific Plan would result in an increased demand for Police services, during both the construction phases of future projects and buildout of the Plan Area. More crime may be anticipated in the Plan Area during the construction phase of future development projects ...
Fire: Implementation of the proposed Specific Plan could result in reduced response times or the need for additional staff, equipment, or facilities. The proposed Specific Plan would result in a population increase of approximately 813 persons over existing conditions. Thus, the proposed Specific Plan would increase the demand for fire service in the form of additional calls for service.
Water: Development associated with the buildout of the proposed Specific Plan could create demand that exceeds available supplies ... Development associated with the buildout of the proposed specific plan could exceed the capacity of conveyance and treatment facilities that serve the Plan Area ... Level of Significance Before Analysis and Mitigation: Potentially Significant Impact.
Air: The proposed Specific Plan would result in significant and unavoidable impacts regarding construction emissions. Construction equipment exhaust would exceed the SCAQMD's ROG and NOx thresholds, resulting in significant impact.
Traffic: The City of Sierra Madre goal for peak hour intersection operation is LOS D or better (LOS = Level Of service, ranked from A to F, F being severely congested. With the addition of the project-generated trips, the following three intersections would to (sic) operate at a deficient LOS (LOS E or worse): Lima Street/Sierra Madre Boulevard; Baldwin Avenue/Sierra Madre Boulvard; and Baldwin Avenue/Orange Grove Avenue.
Kind of reads like something out of the plague years.
So let me ask you a question. Is this what the persons participating in the "community-based planning process" said they wanted from a reinvented Downtown Sierra Madre? High density condo housing and shops, degraded Fire service, increased crime, water shortages, bad air, and increased traffic? Somehow I don't think so.
No wonder Joe was distraught.
Posted by The Moderator at 3:00 AM