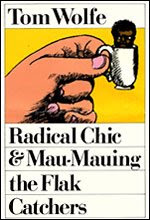 We'll be discussing a rather touchy topic today because, well, we're supposed to. The Tattler mission statement demands that we confront every issue no matter how messy or politically incorrect. And since the publisher of the city's adjudicated newspaper of record has, by implication, linked this fair city to one of the worst moments of racial animosity in this country's history, we thought we should examine the issue a little bit. After all, if we don't, who will?
As a point of reference to the approach being taken here, I'd like to run a passage or two from the Wikipedia synopsis of one of my favorite reads, Tom Wolfe's "Radical Chic & Mau Mauing the Flak Catchers." With the emphasis on the description of the essay "Radical Chic."
"Radical Chic & Mau-Mauing the Flak Catchers" was a 1970 book by Tom Wolfe ... (that) looked at the conflict between black rage and white guilt. The first piece is set in the composer Leonard Bernstein's duplex on Park Avenue in Manhattan. Bernstein assembled many of his wealthy socialite friends to meet with representatives of the controversial Black Panthers and discuss ways to help their cause. The party was a typical affair for Bernstein, a longtime Democrat, who was known for hosting civil rights leaders at such parties ... The Bernsteins could not be seen with their usual black butler and maid, so they hired white South Americans to serve the party. Bernstein's elite friends and guests are labeled the 'radical chic,' as Wolfe characterizes them as pursuing radical ends for social reasons ... Wolfe's criticism is implicitly of the general phenomena of white guilt and armchair agitation becoming facets of high fashion ... When Time magazine interviewed a minister of the Black Panthers about Bernstein's party, the official said of Wolfe: 'You mean that dirty, blatant, lying, racist dog who wrote that fascist disgusting thing in New York Magazine?'"
Literary criticism can be cruel. Especially when it is linked to politics.
A couple of days back our local Kiwanis Club hosted a gathering designed to enlighten and delight the regulars with an edifying presentation on the mysteries of newspaper production. And as their guest speaker they brought in the publisher of our local adjudicated newspaper of record, Susan Henderson. Despite the paltry attendance at the function (with two elderly gentlemen actually succumbing to slumber during the talk), Ms. Henderson soldiered on, discussing whatever happened to be on her mind at that particular moment. A rather disjointed presentation as one attendee described it. And then, in what was almost a non sequitur, Susan dropped the following bomb:
"What is this, Sierra Madre or Mississippi in 1959?"
Now that is quite a remark. By citing "Mississippi in 1959," Susan was making a reference to a time when the Civil Rights movement first began to make its presence felt in the distant reaches of the old Confederacy. With racist organizations such as the Ku Klux Klan initiating a reign of terror and murder against both African Americans and the Civil Rights workers who were attempting to bring an end to racial discrimination there. A particularly ugly and unfortunate time in this country's history. With an African American in the White House, that time seems almost unimaginable today.
So why this unfortunate reference? And why now?
Apparently at the meeting Susan was asked about some of the difficulties she has been facing as of late. And perhaps hoping to anticipate any questions on the topic, she even made a reference to the State Superior Court decision that determined she had absconded with the "Observer" in a most illegal manner. The Court settlement dictated heavy financial penalties plus the loss of the right to use the word "Observer" on the masthead of her paper. And then, after months of refusing to comply with the decision of this Court, being cited for possible contempt charges with the very real possibility of severe penalties being levied next month.
But there was also the feeling in the room that this wasn't really her crowd. Many of the livelier people in attendance were not there to learn about the newspaper business, but because they wanted to hear what she was going to say about issues that have made her a figure of some controversy in town. The nasty and untrue attacks on Nancy Shollenberger that the "Observer" printed during last year's election cycle would be an example. Or the insinuations printed there about now Mayor Pro Tem MaryAnn MacGillivray that proved to be so utterly baseless being another. Or the Hispanic house cleaner that Susan preferred to belittle and mock rather than pay her what she was owed.
And now there is a growing suspicion among many people that the attempt to set up City Council members by having someone secretly tape them at a meeting in hopes that violations of the Brown Act might be discovered was done with "Observer" involvement.
And the reviews were not very kind. One reader posted this observation:
"Susan Henderson, a bitter woman who was defensive and not enthusiastic. No cheerleading, just a 'poor me' in every paragraph she spoke. Susan 'the victim.'"
Another had this to say:
Susan Henderson's post-luncheon monologue -- 'keeping a community newspaper alive, never lose your focus' -- for the Kiwanis outfit was an anti-climax. Just as the questions were getting good the moderator shut the whole thing down."
I guess it's easier to just label the town racist than answer questions on topics you'd prefer to neither acknowledge or discuss.
Posted by The Moderator at 5:00 AM