The Cumquat Is Back Up On The 'Net 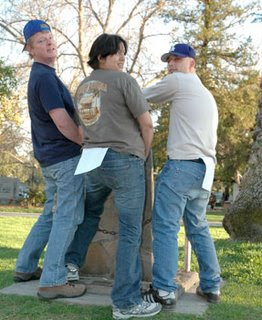 Well, it looks like they just can't help themselves. The Downtown Investors Club gave their hearts to Jim Snider long ago (Jim is pictured here in a typical moment of whimsy urinating on a memorial honoring Sierra Madre's Boy Scouts), and they just can't stay away.
Now this isn't the first time The Cumquat has emerged from the primordial ooze of its well-deserved demise. I published an article about just that on the Foothill Cities blog sometime back, after which the re-emerged Cumquat disappeared in about 15 minutes. And wouldn't you know, that did just happen again. So we had to revert to using a ghost address. Which generally gives us about three weeks of continued viewing.
There certainly is a certain degree of apparent shame to their love for The Cumquat. After all, why else would this new location have been deleted so quickly? And maybe it is the shame aspect that makes the experience so delicious for them?
The new location for The Cumquat can be found by clicking here. The actual web address was migwell.wordpress.com. Which, as I noted, has now suddenly vanished. But Google shadow accounts have once again come to the rescue! As the old Raid insecticide ad had it, they can run but they can't hide.
The article I've cited above is one of those Fay Angus was referring to when she let John Buchanan have it over his unfortunate endorsement of the quasi-pornographic Sierra Madre Cumquat in a front page Pasadena Star News article. (A video link to this exchange can be found by clicking here.) No news on the then Mayor of Sierra Madre ever making it over to Memorial Park to clean off the desecrated memorial.
There are more articles posted and I can link to them if you wish. Or, just go to Google Search and type in the words site:migwell.wordpress.com. Then click on the word "cached."
Now, of course, the big question that needs to be answered is who is this "Migwell?" With the Cumquat now little more than an historic artifact from the failed campaign to defeat Measure V (something that set the associated parties back a cool $180,000), the issue becomes who would want to revive this raunchy site?
And that took the vaunted Sierra Madre Tattler Research Team about 10 minutes. If you take the name "Migwell" (migwell@verizon.net), and plug it into Google, this linked site comes into view. And if you scroll down the listed members of Echo Company (2nd Battalion - 9th Marines), you will find next to that "Migwell" e-mail address the name Arnold "Arnie " Perez of Sierra Madre, CA appears. Miguel (which "Migwell" is a play upon), being the name he uses these days, especially for his movie character actor roles. I guess it just has more flava than "Arnie."

The first time The Cumquat came back from the world beyond it was found linked to a site called PCA Today. I've supplied a couple of screen shots showing the Google link notifications to a pair of PCA Today hosted Cumquat articles. PCA Today, which stands for Perez Creative Assignments, is apparently Mr. Perez's photography business for those wishing to obtain publicity shots at reasonable prices. It is also a place where portly gentlemen are not advised against wearing shirts with horizontal stripes. You get what you pay for, I guess.
One more question. These articles were written by Jim Snider. Why is the author of this regurgitated Cumquat identified as "migwell?" Writer envy?
Dirts. They just never learn. You really do have to wonder what is wrong with them.
Posted by The Moderator at 10:30 AM