A Candidate For California Assembly That Actually Gets It? 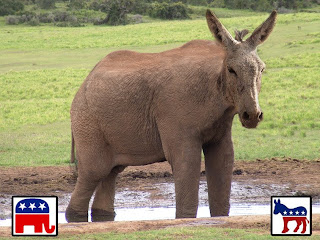 I was checking out some of the articles on the City Watch site last night. City Watch deals with California politics from a City of Los Angeles perspective. And a lot of what is covered there affects us whether we like it or not. Act locally, think regionally might be one way of putting it.
I came across a piece written by a guy named David Coffin. David, as his City Watch article points out, is running in the 51st California Assembly District special election on September 1st. Something that really didn't excite me all that much, I must admit. But I plowed on, and I'm glad I did.
Turns out David Coffin isn't just another paid for Donklephant mouthing whatever meaningless platitudes you usually get from the major parties. He is a successful business owner and aeronautics engineer (he's worked on the B-2, F-18, C-17 and F-22 projects) who is running for Assembly as an Independent. And he is doing this because he is authentically concerned about what is going on in our crazy state. One of the big issues of concern for him is the insanity of pushing high-density development when there are not the natural resources in place to sustain it. With the resource of biggest concern being water.
I'm going to post a portion of the article here. David isn't running in our Assembly District, so I'm not sure how much we can do from here. The 51st A.D. covers the area from LAX and through Gardena. However, the guy certainly is a kindred spirit. And as we discover more and more people standing up and questioning the kinds of madness that pass for governance in this state, I think we have a duty to honor their courage. Because taking on the powerful folks who have a big economic stake in runaway development takes some guts. And it is nice to know we aren't alone.
Drought Cause: Poor Planning, Over-Development: Drought has many forms, but Mother Nature is only a bit player in today's water crisis. Our drought is caused primarily by poor planning and over-development. State Senate bill SB 610 was supposed to protect water supply but it contains a huge loophole that allows planners and developers to use outdated water management plans that promise sufficient water supplies for growth but never deliver.
So how does this happen? It happens because we ignore our resources when we set housing goals. Every seven years a Regional Housing Needs Assessment is handed down by the State that sets housing targets for Southern California cities to meet. Even when those cities don't have the jobs or the infrastructure to support it.
The California Department of Finance recently 'projected' that Southern California's population will double between 2000 and 2050 from 18.7 million people to 30.3 million! With those numbers in hand and without any real regard to water availability, the Southern California Associations ('SCAG') cited the need for 699,368 new housing units.
Pretty much sounds like what is going on around here, right? Sacramento's current push for huge new development in Southern California is based on population growth projections that have yet to pan out. Currently an awful lot of people are leaving the state, and far fewer coming in. This has led to the very real possibility that California will lose a seat in Congress for the first time in state history. Something which calls into question SCAG's suspect and probably BIA-driven projections.
Here is how these issues are spelled out on the David Coffin for California Assembly website:
Infrastructure & Our Water Supply: We have a water shortage because of California's insistence to meet population projections that they predict will double by 2050. State and local planning is out of sync with the realities of our regions resources and infrastructure. Southern California cannot be allowed to continue to grow unchecked to the point where growth strangles our quality of life. Nature has imposed limitations on our region that needs to be recognized by the State of California and its local government the Southern California Association of Governments ("SCAG").
Planning: STOP RUBBER STAMPING DEVELOPMENTS THAT DON'T FIT. No more accepting Sacramento's gospel that we need housing for another 15 million people that would double our population in Southern California and 30 million in the state when we KNOW that we do not have the infrastructure (water, streets, electricity) or services to sustain that kind of growth. California's planning policy needs to be based first of the availability of resources, not faith in projections.
Environment: Planning policies developed by the state and policed by SCAG that encourage doubling the region's population can only hurt the environment and our residents. More people, more cars, more solid waste, more sewage all challenge the efforts to create a green environment.
Here in Sierra Madre we have two City Councilmen who await the day when they would be put back into power and allowed to unleash things like SB 375 on this town. Something that would result in massive over-development, degrading both the beauty of this town and the quality of life we now enjoy. And while they cynically mouth nonsense about high-density development being a "Green" initiative, their true concerns are little more than creating an opportunity for their patrons in the redevelopment and realty industries to make money. After all, if these two characters were as Green as they claimed to be, wouldn't they have connected the dots between our limited water resources and the increased demand new development would bring?
As always, those apples never fall far from the Sacramento tree.
From today's L.A. Times: San Diego high-rise condo market goes from frenzy to fizzle
Posted by The Moderator at 7:00 AM