The El Monte Transit Village: Sacramento Decides To Hang On To Its Money 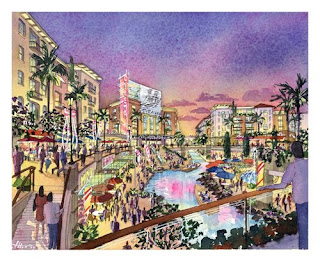 It looks like Titan Development could very well lose a big reason for its existence. Along with a project that SCAG showered a lot of its waning prestige upon. And the City of El Monte is not very happy about it, either. The reason? It looks like Sacramento doesn't want to fork over about $40 million in state grant money because the project's developers were arrested last month for fraud, embezzlement and theft. And then there is that money already allocated.
Imagine. So when did that ever stop them before?
The Mercury News published a story on this topic last Friday called Developer arrests could halt $1 billion El Monte transit project. And for those among us who might have despaired that 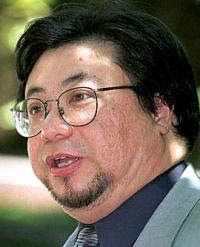 we weren't going to be hearing anything more on this affair, well, read on! It's Monday, and what better day to have your faith renewed?
EL MONTE - The $1.2 billion Transit Village project failed to get two state grants totaling $40 million because of the recent arrests of the project's developers ... John Leung, president of the El Monte-based Titan Development, and Jean Lang, another Titan executive, were arrested last month on felony charges ... "We lost the grant funding because John and Jean were arrested," Councilwoman Emily Ishigaki said.
The consequences of the loss of this money and a previous grant could include the demise of the Transit Village project.
City Manager James Mussenden said now he wants to protect what money the city has secured - a $26.5 million grant awarded last year by the state. "If this money ends up being taken away, we will have just walked 10 years backwards." (and) The state told El Monte officials on June 25 that despite having a strong grant application, that it would not be awarded the grant because of the recent arrests of Leung and Lang, Mussenden said.
Now we here at The Tattler had cynically assumed that we'd heard the last of John Leung's travails, and that because of the nature of the relationship between big redevelopment concerns, Sacramento, and the other concerned parties, this matter would simply disappear into the governmental void that devours all such things. But according to this article that is not necessarily the case, and there really is some hope for future excitement.
While Leung and Lang were previously considered flight risks, El Monte Police Capt. Marcy Vail said she doesn't think that is a problem now because the pair surrendered their passports to the District Attorney ... Three weeks ago Vail said it would only require an additional couple of days to investigate a last minute tip that surfaced while detectives were filing their case with the District Attorney's office ... But with the investigation stalled and funding apparently drying up, police are refusing to release the victim's names, and detectives continue to investigate ... "It is a paper intensive case," Vail said on Thursday. "I expect them to file again by the end of next week ..."
Now there is something here that begs for speculation. If El Monte needs this project as much as certain members of its city apparatus claim, why did their Police Department put this project in danger of fiscal strangulation by arresting John Leung? Can it be that the police there operate entirely independent of such concerns, and just go about the business of law enforcement with little regards to any of the more political concerns? Can there be something else at work here?
Remember, a large amount of cops were recently laid off in El Monte due to the City's precarious financial condition, and by taking out Laing they would have gone straight at the very core of the city and business establishments there. Very much a devastating surgical strike if that is what they're about these days.
The enquiring minds here at The Tattler will be looking for more breaking news on this matter as the week goes on.
Posted by The Moderator at 7:00 AM