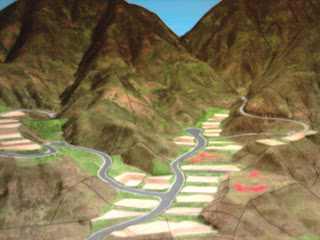 That One Carter remains on the wild frontier of development here in the San Gabriel Valley is a matter of little doubt to those of us who have lived in Sierra Madre for a while. We've seen the floods, and the fires, and know what the potential is for earthquake damage when one of those inevitably shows up as well. And all of these things will happen again, and much sooner than any of us might wish.
But now because of the failed nature of the development projects there, a concerted effort seems to be in the process to move the 29 so-called "luxury lots" to unsuspecting out of town customers. One reason for this being the prices are so absurdly high and we know the real value of these things. But also because the potential for natural disaster up on the hillside seems so obvious to those who have witnessed and understand the dangers.
So in the spirit of making sure that all are aware of what the potential hazards are here, plus taking into account all the usual legal requirements the developers need to fulfill, here is the draft of a letter being prepared for the benefit of the party now in the process of attempting to sell the lots at One Carter Luxury Estates.
To: (*** involved parties ***)
Fr: Concerned Sierra Madre Residents
Re: 1 Carter Ave. lot sales / California State Disclosure Statements
Mr./Ms. xxxxx,
Regarding the lots that you have listed for sale, you will be required to make the following disclosures:
1 - This property has been designated by FEMA a Special Flooding Hazard Area.
2 - This property has been designated, Pursuant to Sections 51178/51179 Govt. Code: Very High Fire Hazard Severity Zone.
3 - This property is designated,Pursuant to Section 4125 - Public Resources Code - Section 4291: A Wildland Area That May Contain Substantial Forest Fire Risks and Hazards.
4 - This property is designated, Pursuant to section 2622 of the Public Resources Code as An Earthquake Fault Zone.
5 - This property is designated, Pursuant to section 2696 of the Public Resources Code as a Seismic Hazard Zone.
6 - Et cetera:
A) there was a murder on this property with the victim having been shot multiple times and left for dead on the site.
B) The One Carter area is also believed by some to be an ancient burial ground of the Tongva/Gabrielino Indian Tribe. Representatives of the Tribe attended the One Carter hearings to protest development of this site.
C) Also the upper reaches of the west and east ridge of the central canyon west of the barn/cottage were burned over in the April 2008 wildfire.
One other thing: Lest we forget, it was this City Council (see link) that enabled what would eventually become the One Carter we see today. That they did not take into account that those eventually buying properties up there would find themselves in harm's way seems both inconceivable and highly irresponsible to many living in Sierra Madre today.
It's our duty to make sure everybody knows all there is to know about the One Carter Estates properties. After all, we are The Tattler!
Posted by The Moderator at 7:00 AM