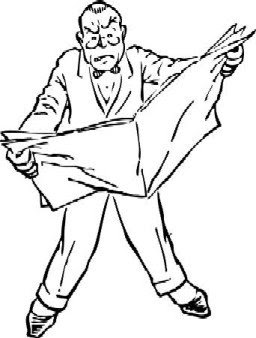 A month or two back I called the Pasadena Star News because I was trying to figure out who wrote one of their editorials. They had written something or other about Sierra Madre, and I figured if I spoke to enough people there someone would spill the beans. But it turns out that is a big secret for the inner sanctums of our local newspaper of record, and no matter what kind of routine I ran on them (pleased citizen wanting to send a cookie bouquet, angry reader, the guy who is about to cancel his subscription for any one of a million reasons, or, my favorite, the guy who has a lot of great ideas and thinks they should use some of them), none of my usual tricks worked. These guys held on to their big secret like they were CIA agents or something.
And now I think I know why. It's in case they make a mistake. Because if you're going to share an opinion about how the world should be run, and within that opinion is included a big old throbbing blunder, well, at least you have that veil of secrecy to hide behind. I can only imagine that Larry Wilson has wished for such a luxury from time to time.
Now I have to admit to something. I have grown fond of the Pasadena Star News. They have some pretty decent reporters, and the paper has an earnest and unpretentious way of going after the news. Their on-line features such as Topix, while certainly a bit rough at times, can also be an interesting workout for those of us who enjoy arguing politics with fabulously agitated people. And the PSN certainly does a much better job reporting on the affairs of our favorite town than that pair of junk weeklies we're cursed with.
So I have to tell you that I take no real pleasure in relating the following. Well, not too much, anyway. But it is kind of funny. And apparently I read their paper way more than they do.
Today's PSN editorial is entitled Our View: Cities should take the deal. And it contains an opinion that should be of keen interest to Sierra Madre, along with the many fine readers of this blog. That being cities such as ours should give some real consideration to dumping their costly police departments and bringing in the L.A. County Sheriff's Department. Very topical stuff. But then they go and ruin it all with the following:
"In tiny Sierra Madre, as in other small cities in these tight economic times, having its own police department is like having a millstone tied around its neck. It has nearly drowned them in a sea of red ink. That's why the City Council is looking at contracting out its police services with the Sheriff's Department or the Pasadena or Arcadia police departments."
I can only hope and pray Elaine Aguilar doesn't see that. She takes this sort of thing very seriously.
Now on June 24 (not all that long ago), the Pasadena Star News ran an article called Sierra Madre in better financial shape than many of its neighbors. And in it was the following paragraph:
"(Sierra Madre) projects $7.2 million in general fund revenues and $6.4 million in general fund expenditures in the 2009-2010 fiscal year starting July 1, followed by $7.9 million in general fund revenues and $6.8 million in expenditures in 2010-2011."
Now does THAT sound like a city drowning in red ink? I should say not. And while those figures are a little bit on the rich side, we really are running some rather nice surpluses these days, thank you. Mostly due to that 100% UUT increase we somehow got conned into voting ourselves.
But what makes this all a little exasperating is that the PSN's editorial department actually published a viewpoint recently (June 5) that talked not only about Sierra Madre's budgetary surpluses, but also how we need to get the UUT hike back on the ballot and voted out of existence.
Here is a telling excerpt from Our View: Sierra Madre should reconsider tax:
"As we noted in this space last March, whoops! An outside audit found an extra $1 million that hadn't been properly accounted for ... In little Sierra Madre, population 11,000 souls, that's real money. As we noted previously, it makes the difference between what would have been an operating deficit at the end of this month, the close of this city's fiscal year, of $315,000; instead, the city will be in the black with a surplus of approximately $46,000."
Drowning in a sea of red ink my foot.
Now, my dear Pasadena Star News friends, here's the real reasons why we're considering sending our Police Department packing. The first being they sue us a lot. We spend a ton of loot on lawyers to defend ourselves from junk lawsuits over nonsense like PD locker searches. It is both expensive and offensive to have these ingrates going after us this way. Especially after we voluntarily raised our own taxes to give them their damned raise. And secondly, we want to take YOUR advice and get rid of the UUT increase. And the best way of doing that is cutting the costs of law enforcement in this town, something that accounts for 52% of our General Fund expenditures. And if these studies the City Council is working on pan out, and the numbers look right, we might actually be able to do that by bringing in Lee Baca's outfit. Who knows?
Maybe I should call the Pasadena Star News today and pretend to be the guy that wants to help them out by editing the editorials covering Sierra Madre. And then again, maybe not. I do have a day job, and we all know that if you don't focus, you can make mistakes.
Posted by The Moderator at 12:01 AM