Sacramento's Not So Funny Money 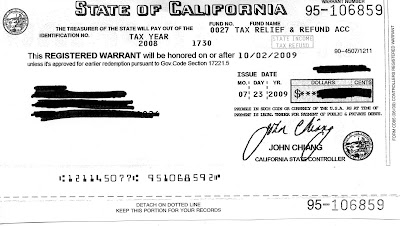 So if it was late 1864 and you happened to be a resident of one of the remaining few regions left to the Confederate States of America, you might very well have gotten something very similar to what we've reproduced here. (Click on the document to enlarge.) It probably would have been a little more 19th century retro in appearance, with maybe a picture of Jefferson Davis or Robert E. Lee to dress it up a bit. But the purpose behind it would have been basically the same. Because what you are looking at is scrip issued by a failed government that cannot pay its debts.
Of course, this is California, and it is still very much 2009. And what we see here is the tax refund "check" issued by Sacramento and mailed to someone I know. Schoolteachers, such as my friend, are paid 10 months out of the year. And during those 2 months they have off they're pretty much on their own. But, and as many of them have learned, if you get an extension on paying your State income taxes, your refund check will arrive during the off season when you really need the scratch. And you use that money to live on until school is back in session. So imagine the surprise you would have experienced when you received this little beauty. Because, and as it says right on this document, you won't be cashing it until October. Summer job here we come. That is, if you can find one.
Now the official term for this item is not scrip, or funny money, or Confederate money, or even a "bag full of lottery tickets." Sacramento would never use terminology as crass as that. No, and as is usual when government screws up badly, neutral language must be crafted to make it seem like things aren't as bad as they really are. And in this case that neutral language is Registered Warrant. Here is how our State Controller defines it:
A registered warrant is a "promise to pay," with interest, that is issued by the State when there is not enough cash to meet all the State's payment obligations. Registered warrants are legally negotiable instruments that bear a maturity date of October 2, 2009. IOUs may be redeemed, with interest, by the State Treasurer on or after October 2, 2009 ... These IOUs are issued in the place of regular warrants, or checks. The interest rate, set by the State Pooled Money investment Board on July 2, 2009, is 3.75% per year.
3.75% per year? Talk about your sub-prime interest rate.
Of course, having money garnished from your paycheck because the State does not trust you to save up enough on your own to pay your income tax bill is bad enough. But to have it turn out that it is those who are taking that money who can't cover their debts, well, that might seem galling to some. Especially those stuck with temporarily useless paper like my friend. But our State government does not believe in equally shared obligation. These are people that, while paid by us, do not actually work for us anymore. They've taken on a life of their own.
So when Sacramento comes around to places like Sierra Madre to take away $300,000 in our property tax money, or our CRA money, or remove our rights to CEQA reviews of any potential toxic impact caused by State imposed redevelopment projects, or to tell us what we can and cannot include in our General Plan anymore, just remember one thing. They are the exact same people that couldn't find it in themselves to cover a schoolteacher's income tax refund check.
And as such are persons completely without honor.
Posted by The Moderator at 7:00 AM