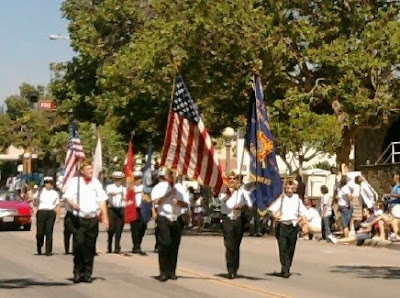 Maybe it's because few of the folks who write for it actually live here, or possibly it is just a native lack of curiosity on their part. But the Sierra Madre Weekly's grasp of what is going on in the town it is named after seems, well, tenuous at best. But then again, if you were publishing basically the same paper in 6 different towns from an office in Monrovia, and doing little more than just changing mastheads in the process, I guess you'd be a bit hard pressed in the authenticity category as well.
Here is a case in point. In the Grand Marshall selection process leading up to the 4th of July parade, there was a bit of controversy (well, a difference of opinion) on who exactly should be selected for the honor. And there really were two camps with decidedly different viewpoints on the matter. Which is fine. Sierra Madre is a town where folks care about such things. And people here understand that.
But this is how the Sierra Madre Weekly saw it:
"Despite some Bloggo-blabbermouth's claim to the contrary, there was no 'controversy' over the selection of the July 4th Parade Grand Marshall in Sierra Madre this year. In fact, the 'controversy' was only blog propelled and perceived."
Of course, what the authors of this article (most likely in part Terry Miller, the long time SMW mainstay who apparently outed himself recently as having once been a photographer for the lascivious website The Cumquat) are referring to here is something that appeared on this very blog. Though I can't for the life of me figure out who he is referring to as a "Bloggo-blabbermouth." The people who write for The Tattler are highly sophisticated artisans of the written word who deal in great ideas expressed with stunning clarity. If they didn't they'd be writing for The Weekly.
(Personally, I think Terry's umbrage here is due to his being a tad upset that we made fun of noted environmental advocate Joe Mosca and the "Green Thunder V-8 GTO" he rode in our 4th of July parade. Terry does seem to be a dedicated fan of the Councilman, and can become distraught when others don't share his enthusiasm.)
And so, as volunteers dedicated to bringing truth to the fore, we here at the Sierra Madre Tattler are going tell this as it really happened. This is a Sierra Madre story, and one that needs to be heard.