Joe Mosca Sees A Light At The End Of The Tunnel 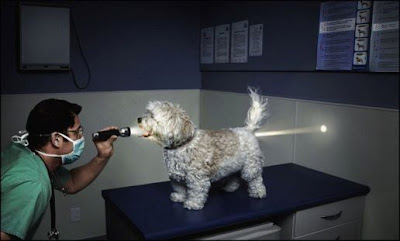 In this morning's Pasadena Star News, Joe Mosca, a man who can always find the bright side to any situation where a developer is about to get their way in Sierra Madre, made the following statement regarding possible settlements in the case of One Carter and Stonehouse:
"These new owners have given us a lot of hope to believe there is a light at the end of the tunnel."
He then went on to add the following:
"We don't want to be able to look up and see big mansions on the side of the hill. The values of our community are encapsulated in the Hillside Management Zone."
I thought that the real values of the community would have been in keeping One Carter as it had always been, one of the most beautiful wooded places to be found in Sierra Madre. Apparently in Mr. Mosca's mind a barren tract of scraped dirt in one of the most visible parts of our landscape is more to what we're all about. That even a pro-development party such as Judy Webb-Martin would refer to what has happened there as "the raping of our founding father's property" gives you an idea of how unfortunate and inappropriate the comments Joe made for this article really are.
Now here is where the math doesn't quite add up. The 27 lots at One Carter are currently up for sale at around $800,000 to $1 million a pop. Is this the kind of price a prospective home builder is going to pay for a lot to construct what they will likely regard as being small house? While these lots are not, as one realtor confided to me under an oath of blood secrecy, selling very well, nor are they going to move briskly for the huge prices being asked, the point is that they are not designed for the "values of our community" no matter what kind of happy face is put on the situation. These are McMansion lots going at McMansion prices, plain and simple. And if they can't be sold to buyers desirous of building large monuments to the great role they play in life, how are they going to sell when these folks are informed that they cannot build what they want?
And that, of course, is the catch. While some of the lawsuits have been settled, and to our favor, the most important questions still remain. And the biggest one of all for One Carter is the HMZ question. While Sierra Madre wants potential builders to adhere to our new HMZ, that property was originally chopped up after the original One Carter Map had already been approved. So, in the minds of the interested parties, their deal (albeit once removed ) was made under the law as it was understood then. What they would appear to believe is that we are now trying to change the rules after the game is over. And what the current One Carter people are holding out for now is that their needs be recognized by the City as an exception, which would allow for the building of those "big mansions on the side of the hill."
And how can One Carter not push for this? To agree to adhere to the new HMZ would mean accepting that they have property that will not sell. What kind of business people would accept something like that?
And while there is a momentary truce in the war, the threat of a resumption of lawsuits is the catalyst One Carter hopes will drive us towards making the concessions they want.
In other words, the situation may have been tactically altered a bit, but nothing has really changed from the Dorn Platz strategy.
Now it has been reported that the City is currently in the process of possibly purchasing Lot 3 for the price of $1,080,000. Something which would keep that site from being the home to any highly visible structure that would fly in the face of "our values." But if there is really any confidence that structures like that will not be built up there, why would we need to spend all that money for a lot?
So anyway, what does all this have to do with Joe Mosca's sunny statements in today's Pasadena Star News? What is the real agenda here? In my opinion, he's just setting us up for the fall. We've lost the war, so let's just declare victory and run away as fast as we can. After all, hasn't the fear of lawsuits been the message for settling all along?
Better to just say that we've won and hope the consequences don't become apparent until after next April's elections.
Posted by The Moderator at 7:45 AM