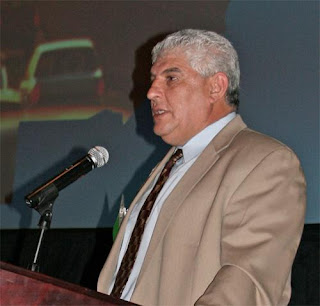 They had an entire army of SCAG officials and followers out to last night's City Council meeting, but when you get right down to it they didn't really have a whole lot to say. They blustered, they pontificated, and Hasan Ikhrata even made a veiled threat to Mayor McGillivray about "the disservice" she would do to the community if we were pulled out of SCAG. You could almost hear in his words the distant rumble of indignant patriarchy.

But when Don Watts, Kurt Zimmerman and MaryAnn McGillivray held the SCAG faithful's feet to the fire, what defense did they fall back on? "It's not our fault!" "We tried!" "The state mandates RHNA numbers, we can't do anything about it!" So it is just as we've always said here on The Tattler, SCAG is for all intents and purposes merely a rubberstamp for Sacramento, and has no real power to bargain for anything. In other words, they're a particularly ineffective middleman, a distraction that does little more than serve as a shield for the real culprits in the campaign to force hyperdensity down the throats of cities such as ours, Sacramento. That plus its patrons in the realty and redevelopment lobbies.

Sierra Madre declined to authorize the spending of the $1,000 it would take to renew our membership in SCAG for now, instead taking a wait and see stance. MaryAnn McGillivray and Don Watts will be attending some future SCAG confabs to find out if our continued membership in this apparently powerless organization is worth even that relatively small sum.

The City Council voted 3 to 2 to select Michael Howard to the Canyon Committee. Joe Mosca and John Buchanan fielded the losing candidate, and Glen Lambdin was sent home with an empty plate. Apparently combining the terms "Glen Lambdin" and "well-balanced committee" struck the majority on the City Council as being something of an oxymoron. The City Council did unanimously decide that a moratorium on new building in the Canyon was the right thing to do, and tasked staff to prepare documents that will allow a final vote on the matter. More proof that there is a God in heaven.

Tim Hayden's shameful attack on Michael Howard was an embarrassment to the values and decency of this community.

The highlight of the evening for this observer was the beginning of a process that will likely result in Joe Mosca being relieved of his SGVCOG duties. The reason being his poor attendance at COG functions as revealed in the meeting minutes published on this organization's website. After hearing from SCAG about the importance of participating in the activities of the regional planning organizations, certainly we need to have a liason that will actually show up at the meetings. Once staff prepares the necessary documents, the eminently qualified Don Watts will likely serve as our new liason to the San Gabriel Valley Council Of Governments. The vote to move this process forward was 3 to 2.

Joe Mosca's response to the intiating of the process to knock him from his SGVCOG perch was typical. He admitted that there are many "things I have missed," but went on to claim that he is personally committed to COG. Then he blustered to Mayor MacGillivray that "you don't even know what COG means!" And then, in a statement fraught with pathos, actually blurted out, "Do you know how embarrassing that would be?"

It is nice to see that Joe Mosca could soon be suffering from the very thing his former supporters have experienced these last 3 years. Embarrassment.

Kurt Zimmerman delivered a withering blast at the Mountain Views "News" over its apparent failure to live up to the standards a paper must meet if it wishes to remain an adjudicated publication. Something that could result in the paper losing its legal advertising contract with the City of Sierra Madre. Cited by Councilman Zimmerman was the paper's failure to share subscription information despite repeated requests from the City that it do so. Also cited was the widely suspected inability of the "News" to publish regularly, and on the same day every week. Also adjudication requirements.

If it is shown that the paper has not lived up to its obligations, Sierra Madre would be within its rights to take the matter to Court and file a complaint. If the complaint should stand we would be free of having to support this highly contentious paper with our tax dollars.

Oh, and the Alverno situation is now in the hands of the lawyers. Guess we'll have to stay tuned for more news on that one.

An incredibly momentous meeting. One of the most remarkable I have witnessed to date. We will have more to say on these matters as the week goes on.
Posted by The Moderator at 1:00 AM