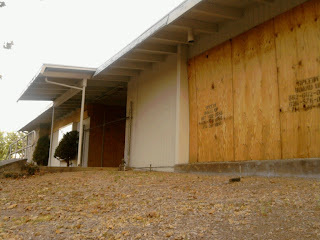 There is a remarkable disconnect in town, and it goes something like this. The Sierra Madre Skilled Nursing Facility, that boarded up old nursing home on Sierra Madre Boulevard just across the street from City Hall, has been an eyesore for quite some time now. With boarded up windows and a truly remarkable collection of sun cured weeds, some growing from between cracks in a parking lot girdled with tetanus enriched rusted fencing, it really does make for some kind of hauntingly eerie imagery. Views you might enjoy if you're into presentations that evoke the apocalyptic.
Now this place is something a lot of people talk about when they want to get their grievance on about Sierra Madre. Next to our litigation happy Police Department, the SNF is perhaps the most griped about subject in our sunny little burgh. It has become a metaphor and rallying point for many who feel the need for something basic to show concern about. And as such it has become our very own widely misunderstood symbol of things gone wrong.
Now where the disconnect comes in is with the need to identify exactly who bears the responsibility for this rambling reverse eye candy. Many seem to feel that the reason the Skilled Nursing Facility has degenerated into the mess it is today is because "the City refuses to do something about it." Others believe that it remains a most visible reminder of the refusal of some in this town to allow the building of "profitably sized" mixed used facilities, and that it is the stubborn backwards mentality of a few which has caused our town to suffer from such ruinous blight.
But what you never hear is anybody blaming the building's actual owner. And that is very odd. Now if you or I allowed our homes to crumble into disrepair, infecting the lawns of others with both gophers and jimsonweeds, people wouldn't blame Measure V or the Green Committee, right? No, they'd blame you, the owner. And you'd be cited for it. But here we have some sort of corporation sitting on one of the most visible properties in Sierra Madre, and it is just allowing the place to rot. The Skilled Nursing Facility hasn't seen a drop of new paint in years.
So why is this owner getting a pass? And why don't people recognize that the reason this building sits in its current neglected state is because the owner refuses to do anything about it? Seems pretty obvious to me who the blame should fall upon here.
But there is now a solution in the works, and it looks like our City Council is about to make it happen. As we recounted a few months back, the City of Glendale adopted something called a Blight Law. Passed by their City Council, it takes a hard-nosed approach to dealing with indifferent absentee owners who neglect their properties. Here is how the Glendale News Press laid it out on May 3rd of this year:
City targets untidy homes - Council will mull proposal to fine banks $1,000 per day for blighted foreclosed homes: Banks and housing speculators could face fines of up to $1,000 per day for failing to keep vacant properties up to code under a proposal scheduled to go to the City Council on Tuesday ... The proposed law would authorize the city to exercise its authority granted under state law to hold new owners of foreclosed properties accountable for maintaining their parcels ... The $1,000 daily fine - the maximum permitted under state law - is intended to financially compel lenders and speculators to invest in the properties that they acquire and to quickly turn them around, either by maintenance or sale so as to not further deteriorate a neighborhood, city officials said.
And the good news is Glendale has a City Council that was willing to overcome the shrill opposition of both real estate investors and realty concerns and pass this Blight Law.
Now obviously whoever it is that owns the Skilled Nursing Facility is sitting on the place waiting for something special to occur. Be it a rise in real estate prices, somebody making him an attractive offer, you know it has to be something with profit in mind. And while there is nothing wrong with making a buck in America, you do need to play by the rules. And allowing your property to rot in the middle of what is otherwise quite an attractive little boulevard is just not responsible citizenship. Which is why this fellow needs to feel the sting of a no nonsense Sierra Madre Blight Law.
The theory many have is that the place was bought when the prospect of massive downtown redevelopment was real and financially compelling. But like many of our downtown investors, the current owner was disappointed when Measure V was passed. And, as the theory goes, the owner has been sitting on the SNF ever since in hopes that someone like Sacramento Joe would take over City Hall and allow him to build 6 story condos with attached nicknack shops and pay-to-park underground car storage. Just like he could have had Measure V failed.
Listen, it's time we passed a Blight Law. One with teeth and fines that will get this guy and his rotting building out of our collective face. Whatever the reasons for the owner allowing the SNF to become the disgrace it is, we have endured this insult to Sierra Madre long enough. We need to take some control.
Posted by The Moderator at 7:00 AM