Michele Zack Is One Of Us ... The Tattler Reviews "Southern California Story - Seeking The Better Life In Sierra Madre" 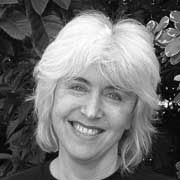