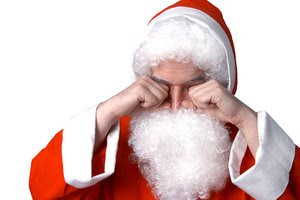 Perhaps it is a sign of the tough economic times we're living through these days. Or maybe it was just a misunderstanding. And there is a possibility that the Jolly Old Elf was cruelly used in a misguided powerplay that backfired. But the word in town yesterday is that when the beloved yearly Sierra Madre tradition of Dickens Village comes together next weekend, Santa will not be where everybody thinks he should be.
I have to level with you, I'm not quite sure which way to go with this story. I've heard from more people than you might expect for a matter like this, and there are two very distinct story lines here. And I just don't have enough evidence to make a definitive decision on who, if anyone, is at fault. I will make something of a call towards the end of this article, I have an obligation to at least do that. But I'm not completely comfortable here. Feel free to weigh in.
The first version of the story goes something like this. Members of the Sierra Madre Police Department demanded an extra $400 to close Baldwin Avenue and man the barricades during the Dickens Village shindig coming up in a week or so. And the Chamber of Commerce, perhaps feeling the pinch of a challenging economy, just doesn't have that kind of cash available right now. So rather than sell the furniture from their Auburn Avenue offices, they decided to forgo much of their traditional rollout for this yearly event and shuffle Santa over to the less desirable Renaissance Plaza. Which, in case you don't know where to find it, is about a block east of The Bottle Shop.
Now Kersting Court would still be part of this celebration, but with Baldwin Avenue now open to traffic as usual, the many nicknack booths and art kiosks would have to be be situated there. Along with the Nativity Scene, Star of David, and the usual hastily scrawled cardboard signs dedicated to Festivus. And that means no room for Jolly Old Saint Nick at the Inn. Apparently some of the more senior members of the Chamber are none too pleased about being forced to do this, and expressed their displeasure to people I spoke with yesterday.
That is apparently one side to the events I've described. The City Hall version is somewhat different. The Chamber wanted to set up a childrens' train on Baldwin this year, along with those arts and crafts kiosks. And the cost of shutting down Baldwin and paying Sierra Madre Police Officers to man the ramparts would be around $1,200. The City offered to pay 2/3s of that cost, or $800, leaving the other $400 for the Chamber to pick up. But the Chamber, in an unfortunate moment of pique typical of those given to episodes of entitled behavior, refused to cough up any dough whatsoever. Didn't think they should have to. So they took their Santa and went to Renaissance Plaza instead. A place that many feel suffers from a lack of sunshine.
Now I don't want to let you into my other world too much, but my day job is in the entertainment field. And I do stage outdoor events from time to time. Some of them pretty big, and not always on the fashionable side of town. And when I have security requirements I always hire off duty L.A. police. They're pros and comfortable with crowd control. I've never had any problems. And I've got to be straight with you, for $1,200 I could hire a sergeant and around eight regular cops, no questions asked. And for something like Dickens Village, which is not a high impact security situation in my opinion, I'd spend less than a third of that amount. Probably two off duty police officers and some rent-a-cops would be fine.
For security costs at a commercial Christmas event in Mayberry $1,200 is some pretty wack money. And I'm not sure we should be spending our tax revenues like that. Even for Santa Claus.
There is another angle in the mix that clouds our picture a bit. This story had the Chamber moving Santa to Renaissance Plaza because it would encourage people to shop more. The claim being Kersting Court events only drive people into Starbucks or up the street to Beantown. But if that was the true original intent, why all the effort to get the City to shut down Baldwin and foot the entire security bill? Or all the talk about that kiddie train? I sense a disconnect.
You know, I heard a very nice story yesterday as well. Talbot's of Pasadena donated brand new $400 gowns to Sierra Madre's Rose Parade Princesses. Beautiful dresses I've been told, and each of our four Rose Parade royalty will get to keep them after the parade is over. The dresses becoming cherished keepsakes, reminders of a great event in their lives.
You really have to admire that kind of class.
Posted by The Moderator at 6:15 AM