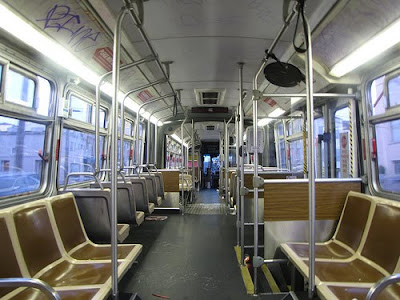 A lot of effort is being made these days to convince people to take public transportation. And there are many reasons for this. The first being that the various governments we live under have spent literally tens of billions of dollars to build this stuff. And if we don't ride their creations they'll feel both foolish and deficient as planners. But there are also far grander visions at work here as well. The most prominent now being to "get people out of their cars." Cars, according to certain advocates, being pretty much the cause of almost all the world's woes these days.
And if you don't believe me, check out the palaver in an LA.Streetsblog article entitled Your Car Will Not Save The Planet:
Even if we were to devise a perfect car, one made out of recycled tires and printer paper, one that harnesses photosynthesis to not only be carbon-neutral, but actually make energy from atmospheric CO2, even if we could make a car with no direct environmental impact, it would still be an environmental and social disaster. Our waterways are contaminated by engine fluids and lubricants that run off of road surfaces. Our natural groundwater tables are falling because rainwater is unable to penetrate pavement.
Cars still allow sprawling development that eats up wild lands and spits out bland suburbia. Species' ranges in the few precious areas of wilderness that we have are disrupted by highways. We would still live in a society where we shut ourselves off from one another in our own private boxes, promoting inequality and a lack of respect for shared humanity. We would still leave our inner cities to dangle. Our streets would still be unsafe places for children to play, and we would still kill thousands every year in automobile crashes ...
Whew. Who knew that when mom took you and the kids to the supermarket in that fine old station wagon she used to drive, she was really engaging in something approaching the crime of the century. Of course, in the eyes of our more militant public transportation advocates, she was one of millions hellbent on an unwitting mission of mass destruction.
The shock troops of SB 375 need you to believe that what they are saying is right, and that you have no choice but to get out of your "private box "(I think he is talking about your house), get rid of your car, and join the huddled masses at the bus stop.
But then there is this problem. Left to their druthers, the vast majority of people would prefer the convenience and ease of private transportation. You step out of the door, get into your car, and it takes you to wherever you want to go. No long waits at a bus station, or squeezing onto trains filled with the suffering masses. Given the freedom of choice Americans are accustomed to, they'll take the car every time. And I doubt that many would even conceive of the alternative as being a serious option.
And did you know that even the employees of Metro, the grand overseers of public transportation in this part of the world, prefer to take their cars as well? According to Browne Molyneux, the editor of the spirited but somewhat snarky The Bus Bench blog, only 1.6% of all Metro employees regularly use public transportation.
First off lets all congratulate Metro with being in compliance of Rule 2202. The one thing I love about Metro is that it never disappoints me ... I knew the number of Metro employees that used their company's service was low, but I thought maybe 10% or 20%. The number of people in L.A. County who take public transit is 7%. I thought Metro would at least match or beat that. after all, 7% is an amazingly low number. I gave Metro too much credit. Out of the approximately 9200 employed by Metro in 2009, 155 of them use Metro's service: the beautiful trains and buses ... 1,540 out of 9,200 Metro employees have a TAP card.
If true, that would seem to be a problem. If you are going to claim a moral and ethical superiority to the Los Angeles car culture in the name of saving the world from such things as global warming, you should at least be able to convince the folks on the payroll to take the bus.
We've discussed SB 375 on this site many times, and as I am sure you know by now the centerpiece of its rationale for existence is public transportation. The building of Transit Oriented Development being justified by Sacramento as the one surefire way to get people out of their cars and onto public transportation. And when our SB 375 RHNA number is presented to Sierra Madre by SCAG in 2012, we will be required by state law to open our town up to a massive dose of high density development. All in the name of getting people to live near public transportation, which is supposed to cause them to abandon their cars and get on the bus or train. A pretty vast leap of faith in my opinion, and hardly reason enough to take the wrecking ball to quaint foothill villages like our own.
But if Metro can't even get its own employees to take advantage of their public transportation services, what hope is there of getting everyone else to do it?
Posted by The Moderator at 7:00 AM