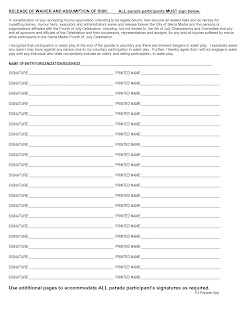 (Ed: Originally appearing on July 2, 2010, this post has become the most viewed ever on The Tattler. In a City where "double dip fees" have become the norm, is it no wonder kids now have forms they need to fill out as well?)
We've all heard about how pesky kids squirting water pistols at the Sierra Madre Fire Department at our 4th (or is that our 5th) of July Parade is a tradition that has now been left behind. No longer will kids and firemen duke it out along the parade route. And the throwing of candy? Oh dear no, that simply will not do, either. It is a control freak world we're living in nowadays, and Mr. and Mrs. S. M. Nuisance need to have their way. They are important people, and know that you can only properly appreciate the magnitude of their influence here in town when they're killing your joy.
The parade water pistol ban seems to be particularly unpopular, especially among those having young kids. Allowances for proper behavior aside, you should always try to encourage a free and spontaneous spirit in the little guys. And the last thing any parent enjoys seeing is their kids subjected to the same tedious and politically correct over regulation of everything fun that we as adults face. Childhood, and certainly during as festive an occasion as a parade celebrating the birth of our American freedoms, should be a refuge from such petty tyranny. But alas, that no longer seems to be the case with our 4th (or 5th) of July Parade. It is quite an unfortunate lesson for children, if you think about it.
On the Sierra Madre News.net website, where somber enthusiasm for Sierra Madre's new wave of behavior codes is sometimes elevated to near religious levels, the rules for "water play" are carefully spelled out. Here is how Rooster Coburn explains all the non-excitement:
New Water Rules For Fourth (sic) Of July ... Traditionally, water has been squirted back and forth amongst viewers and participants during the parade. However, this year the City has established a new set of Water Play Zone Guidelines. Sierra Vista Park is now the only designated water play zone (west side of the park on the grass lawn). The Sierra Madre Fire Department will be spraying water into Sierra Vista Park for children and families to play in. Only water/squirt guns will be permitted at the water play zone. Absolutely no water balloons or use of water hoses will be tolerated at the water play zone or anywhere along the parade route. Absolutely NO water will be allowed along the parade route. Parking signage will exhibit a "No Water Zone" notice along Sierra Madre Blvd.
Apparently there is even a Release Form that must be signed before you can participate in the carefully controlled joys of the Water Play Zone. Click on the inset above for instructions and a place to sign. I'm not sure whether you'll need to bring your lawyer or not.
Now all of this has not escaped the notice of some Sierra Madreans. Here is a note sent to this site recently by the parents of young kids. They have decided not to sign the release form.
I have long wondered how our super sensitive Chief of Police could have arrested that poor Sierra Madre dad for shooting her with a water gun during a parade where the highlight is shooting water at local officials (the Fire Department) and being shot with water by local officials (the Fire Department). I guess he should be thankful the Chief only arrested him. After all, SMPD could have 'tazed him, which might have resulted in electrocution. Alternatively, SMPD could have shot him like the poor slumbering guy in the back of the Murano.
In any event, it is now clear that he was arrested for violating the official parade waiver, which requires one to promise, on apparent penalty of arrest, not to "engage in water play with any individual who does not similarly indicate an intent, and willing participation in water play." How one determines a person's "intent and willing participation in water play" must be like pornography - you know it when you see it.
Thank God we live in a small town where 8 year olds have to sign a water play waiver to walk in the Fourth of July parade! And a small town where the local constabulary threaten you with arrest for participating in water play so prevalent that it is included in the parade waiver. And where they arrest you for washing poop off the sidewalk. And, of course, where they shoot you for sleeping off your Buc buzz in the back of a car.
It is nice to see that the spirit of freedom still lives on in Sierra Madre. Too bad it has now been restricted to the sidelines during a parade honoring the birth of American democracy.
Posted by The Moderator at 6:30 AM