Sierra Madre Has A Mountain Of CRA & Water Bond Debt. So Now City Hall Wants To Sell Even More Bonds? 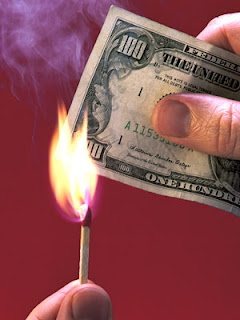 "Nothing defines humans better than their willingness to do irrational things in the pursuit of phenomenally unlikely payoffs." - Scott Adams

Now you'd think that after all the revelations about Sierra Madre's considerable Water Bond and CRA debt the Gang of 4 would have the good sense to stop all the spending talk and do something about getting this city back on the road to financial stability. And with the demands coming from the City Council that we fork over more money for things like water because Sierra Madre is so economically burdened by past bad investments, you would also think that they might restrain their genetic tendencies towards irrational spending.
After all, the City Council is asking the residents of this city for more of their money to pay for what is little more than ongoing debt service. Which is what next Tuesday evening's meeting is really all about. You'd think that would be enough for anybody.
Yesterday at the Youth Activity Center something called the City Council Strategic Planning Goals & Objectives Retreat was held. It technically was open to the public, but was so poorly publicized only two residents attended. No notice of it is to be found in the "City Events" calendar on the City of Sierra Madre site. Which is where City Council get-togethers are usually listed. There is a rather airy agenda for the meeting posted under "Featured City Documents," but that is hardly what you'd call a marketing engine.
But as slight as the attendance was, it was enough for the news that follows to get back here. I have long believed that the less notice a special City Council meeting is given, the more choice the information shared is going to be.
The highlight of the affair, and the reason for this post, was Elaine Aguilar's pronouncement regarding how the City could soon be dealing with its rapidly developing cash flow crisis. Beyond raising the water rates, of course. Something they remain very determined to do.
Elaine's solution? "We may need to issue another bond." She went on to note that this would have to be done in public, which is going to need some clarification. Since this would be our first bond since 2003, the inference would seem to be that particular water bond was executed with the shades drawn and the lamps off. Whether or not there was a red light on in the window is unknown at this time.
Issuing a new bond, in addition to the 30 some odd years of paying service on the resulting debt, would also cost us $200,000 just to execute. Or about the current market value of a General Plan consultant.
When questioned about the increased debt load this would cause to our already heavily burdened city, Mayor Mosca, a man who apparently finds the further mortgaging of our future to the tune of additional millions of dollars to be no big thing, had this to say:
"Well, that's why we have a CRA (Community Redevelopment Agency). If we didn't have the CRA we couldn't have this kind of debt."
The CRA, as you might recall, is the City of Sierra Madre agency that the Los Angeles Times recently reported as having debt at around 86% of its total capacity. Which the Times interpreted as being over $10 million dollars in red ink. If so, you can only wonder where Joe intends to hide this new layer of debt. There can't be all that much room left.
So there you have it. The City Council now wants to do the same thing here that Sacramento and Washington DC have done in their much bigger worlds. Try and borrow their way out of problems they lack both the will and wit to deal with otherwise.
The one thing that remains unclear as of this typing is what exactly they intend to spend all this new bond money on, and what kind of bond it would be. There was actually talk about hiring yet another Police Officer, but that was eventually discarded as being "too political."
So why then do they need to sell a new bond?
My take is that our City government has become a very expensive enterprise to maintain. Raises, pensions, consultants, a costly desire to comply with outsized state development agendas, the service on bond and other debt, plus new hires and expensive equipment have placed a real strain on currently available budgets. But rather than have the City reduce costs and modestly live within its means, this City Council would prefer to take on even more debt. It speaks to their sense of a greater glory.
Which is now our very own microcosm of the kind of thinking that got this country into the financial mess it is in today.
http://sierramadretattler.blogspot.com
Posted by The Moderator at 4:00 AM