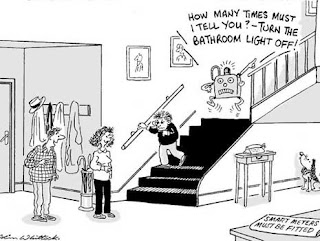 There was a pretty extensive and rather thoughtful article about Southern California Edison "Smart Meters" on the sgvtribune.com site yesterday morning. And since chances are pretty good that you are going to get one whether you like it or not (and pay for it as well), I thought it might be worth a little bit of discussion here on this rainy Sunday morning.
The way language is being used these days does deserve a bit of comment first. "Green" has now become synonymous with boutique development, "sprawl" is how nice little communities such as ours are being described, and "smart" has come to be the description du jour for anything involving large corporate or governmental solutions to the inconveniences caused by those vast lumbering herds of beings known as consumers.
In other words, people like us. We're sloppy, in this instance we need lots of energy to run all of those convenience items we've been sold, and apparently those who supply it would prefer that we do it their way, and on their schedule.
The notions behind "smart meters" are fairly cut and dried. Energy corporations need to get past their manually run power grids and get fully computerized. This would be far more efficient for them, enable cost savings (they could lay off all those meter readers), and allow them the flexibility to make nimble decisions during times of peak electricity usage.
It is supposed to work for the end consumers of their products as well. Apparently "smart meters" will enable folks such as us to carefully monitor our electricity use, and understand that if we run our household machinery during "off peak" hours we would be able to save a few bucks. I certainly know I will be glued to my computer screen ready to shut off the dryer the second I see my rates fluctuate upwards as the Maundry Compound approaches a more expensive peak power usage event. Something that'll make me a veritable Power King in my little realm.
The key to this for the big power boys is to smooth out and control demand. During times of peak electricity usage, particularly during summer heat waves, companies like Edison are forced to make purchases on the open or "spot" market. And since they have to make these buys from other companies (mostly - for some reason - from Texas) eager to make a profit off of Edison's woes they have to pay premium prices, which cuts deeply into their bottom line. Something that makes Edison stockholders and the Board of Directors very grumpy.
The way this is being marketed to us is that it will enable us to save money on electricity costs. Because that is all we really need to know about here. Lord knows Edison has enough people griping about stuff already. But is this really the case? Will we be saving money because of "smart meters?" The sgvtribune.com article raises some questions.
Robert Strong, 37, of Rialto said his monthly electric bill rose sharply after a smart meter was installed at his home about two months ago. "Our summer bills were $200 to $300 and we thought, 'OK, that's pretty high but reasonable,'" he said. "But after the smart meter was installed it went up to $400." Strong said his bill rose despite that (sic) fact he installed an energy-efficient pump for his swimming pool. He also noted that his family was home much less over the past couple months because of his son's football practice and his daughter's softball activities. "They also overcharged my mother-in-law, but they paid her back," he said.
And then there is this complaint:
Mark Rzonca, 53, of Walnut said his electric bill has likewise risen 5 to 8 percent since his smart meter was installed. "It's just average usage," he said. "I don't have an air conditioner ... and it's a smaller 1,800-square-foot home.
Up north where Pacific Gas & Electric rules their realm with an iron hand "smart meters" have been the source of much discontent. And the discrepancy between the "lower costs" claim for "smart meters" and what people have been seeing on their PG&E bills has been so great a class action lawsuit has been initiated and is gaining some real traction in the courts.
The action, handled by attorney Michael Luis Kelly of Kirtland & Packard LLP in San Francisco doesn't allege the meters are faulty. But it does say residents have complained of being overbilled. "Shortly after PG&E began to install SmartMeters, many of its customers began to complain that the bills they were receiving for their electricity had risen dramatically immediately after a SmartMeter was installed at their premises, with no change in usage to explain the dramatic increase," the lawsuit said. "There are people who have documented what they paid in the past and in the present," Kelly said. "And they have demonstrated to our satisfaction that there were billing errors."
Certainly not what your average consumer is looking for in these parlous economic times.
One other thing. Apparently if you are an Edison customer (and do you really have a choice?) you are already paying the costs for your "smart meter." Even though you don't actually have one yet.
Edison is fronting the money for its $1.6 billion smart meter program. The cost will be paid back through a 1.6 percent customer rate increase, which began last year and runs through 2012.
Correct me if I am wrong here, but I do not recall being asked if I wished to purchase one of these items. That is, if I am actually purchasing it and not just defraying the costs of Edison's investment. Were you asked?
Stay dry, guy.
http://sierramadretattler.blogspot.com
Posted by The Moderator at 12:00 AM