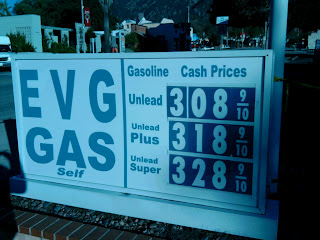 Just back from vacation and I must say that this EVG Gas Station credit rip off situation is very interesting. What an audacious crime! Checked my credit cards with the companies that issued them and all seems OK here. But who knows?
As usual the coverage of this story is sadly lacking in my opinion. We all got the press release on this and I can't see much that hasn't been said in the press and on-line not toeing the official line. So since this is The Tattler, I thought I'd stick with our established standards and ask some of the inconvenient questions that need to be asked, yet never will unless we do it here. I hope nobody finds it to be too indecorous.
Here are my thoughts:
The gentleman who owned the station was selling gas far below what was being charged elsewhere. $3.08 cash price versus $3.27 cash price at the Valero station up the block. The claim being is that he wanted to make a nice impression with his new clientele. Even though he has owned the place since February. It was also impossible to pay cash for gas because the office was boarded up for "renovations." So you were forced to use a credit or debit card.
Oh, and no renovations were ever done.
The owner of the EVG station, a Mr. Yakimenko, must have filled out an application to do business in this town, and Lord knows he had to have paid the fees. Yet this guy hasn't even been brought in for questioning yet. They can't find him. Was the information given to the City real? Do they even know where he lives?
Why was no background check done? This guy was authorized by the City to take credit information from residents here, did anyone look to see who he really was? Can it be that with business fees all that can be expected is properly filled out paperwork?
Chief Diaz is her usual non-revealing self. Yet what City employee or elected official has said anything about this crime except her? Chief Diaz: "All I can say is that the investigation is ongoing and that no arrests have been made." 80 people have had their identity ripped off and you haven't hauled in the EVG station's owner? At least for questioning?
Two reasons why that hasn't happened. The SMPD has been out partying all week, or, most likely, this guy is long gone and they have no idea where he is.
The scenario as I see it: A person or persons of ill-repute and criminal intent took over a defunct gas station. This City, apparently a soft touch, authorized these person(s) to do business here. Yet nobody bothered to check and see who he (or they) are. Or where they lived, which is standard business application information. The home address supplied must have been false.
The question that nobody has asked: Was this EVG station ever a legitimate business? Or was it a set up designed to capture credit and personal information from those who did business there? Was the intent criminal from the beginning?
It looks like this credit card fraud has been going on for a while, and not just the couple days as originally reported. Did the owner(s) conduct their criminal enterprise right under the noses of City Hall and nobody even noticed?
And our friend Mr. Yakimenko. Was it his real name? Was the gas station always part of some identity theft scheme? Did he later fall in with people of bad intent? Chances are pretty good we might never know. Because I suspect he and his laptop filled with Sierra Madre resident credit information is long gone.
One more question: Where is Mayor Mosca? This could very well turn out to be one of the larger crimes in Sierra Madre's history. And if this was an organized crime effort, the damage has probably not played itself out by a long shot. There are many numbers that probably haven't even been touched yet. Which is where the real criminal value lies.
Yet we haven't heard a peep from His Honor. People here are upset and concerned. Can this really be that low of a priority?
http://sierramadretattler.blogspot.com
Posted by The Moderator at 7:10 AM