Time For A Few Days Off 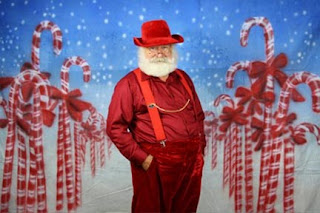 12/25 update ---> The Tattler got a nice plug in the Pasadena Star News from Frank Girardot yesterday. You can link to the article by clicking here.
(Back to our regularly scheduled program ...)
So I'm going to take the rest of the year off. Christmas Eve is tomorrow, and the joys of friends and family are upon us here at the Maundry Compound. Many places to go, credit lines to extend, and the seasonal rhythm we love and await through all of the long months that lack for such occasions. This time of year is just a lot of fun. And the kids won't stay kids forever.
We've hit this blog stuff pretty hard since it was kicked it off in December of 2008. Hard to believe that the Sierra Madre Tattler is now going into its third full year. We've had many exciting adventures, posted 604 articles that have generated nearly 28,000 comments, and gotten more hits than I can accurately account for. I know it's been around 150,000 since June, but before that the numbers aren't quite as clear.
The good news is this blog has become one of the most widely viewed information sources in town. What is said here gets read, talked about and commented upon. No longer is Sierra Madre the captive of pulp pay-to-play prevaricators who only present the tired viewpoint of one certain segment of this community at the expense of everything else. There is now an outlet for the rest of us. We have successfully turned the tables, and what once was a cause for anxiety and concern is now the stuff of comedy. We sing, they dance. And not half as well as they think.
Starting this Sunday we'll be reposting what I believe are the Top 7 Tattler articles of 2010. Comments and all. Our run up to New Year's Day. A look back at where we've been, and a step forward into 2011. A year that I think will be a very important one for this City. What we have been forced to endure since last April cannot last much longer. Nothing that ineffectual and intellectually dishonest can. There is a reckoning coming. Get ready to win.
One more thing. Since I started this blog I have made some of the best friendships I have ever known. I've gotten to know many wise and strong people who have enriched my life in ways I didn't know existed.
Not sure any of us have the right to ask for more than that. It is quite a Christmas present. Thank you.
Back live on January 3, 2011.
All My Best! John Crawford
http://sierramadretattler.blogspot.com
Posted by The Moderator at 4:00 AM