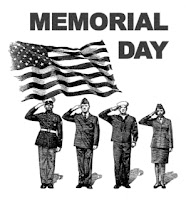 Memorial Day always makes me think of my father. He was a veteran of World War II, having served four or so years on a Navy destroyer. He spent 2 years in the North Atlantic fighting German U-Boats, and his remaining time in the Pacific. Right up to what was to have been the invasion of Japan.
During his first two years of service he spent an 18 month stretch of time where he didn't set foot on anything but the deck of the vessel he served on. So vital was each and every ship to the US Navy that there was no time for shore leave or much of anything except fighting a war that at the time looked like it could have gone either way. He was 17 years old when his portion of that war began, when it was over he was barely 21.
He never made much of his time in service to this country during wartime. It was something he did because he believed it was his duty to do so. He never joined the VFW or American Legion, never marched in any parades. It wasn't that he didn't have the highest regard for those organizations and those who serve in them, because he did. It's just that he never seemed to have the time.
He hit the ground running after the war, started a few businesses, made and lost a couple of fortunes, then left all that behind and lived out the later years of his life in a house just off the 17th green of a golf course in South Carolina. Which was kind of funny since he was truly awful at the game. But that was his slice of the American dream, and trust me, he never gave a damn about anybody's opinion of how he lived it. Freest American I've ever had the honor to know.
I was looking around the internet trying to find something about Memorial Day that might have met with the approval of Seaman Bud Crawford, the guy who did his service during some difficult times, and once it was over never looked back. And I really didn't find anything that he wouldn't have raised a quizzical eyebrow at, then changed the subject. After all, it is always a sunny day where he is now, and there is golf to be played. Badly, I suspect.
So, out of respect for what I figure would have been his advice, I should probably have left it at that. But I won't. Not without this one observation. And it comes from an editorial that ran in the Santa Maria Times a couple of days ago. In a piece they call "A simple thank you might do," they bemoan how the holiday has become yet another heavily hyped day off for shopping, and just how few among us even know what Memorial Day is about. 80% are ignorant of the true meaning of today's holiday, by one poll.
But despite all that, they made a request. Here is how it was put:
The folks at the National WWI Museum have a suggestion, and we support it - take time Monday to pause in your busy schedule, find an active member of the military or a veteran, and thank them for the sacrifices they made and are making.
You also might consider visiting a local cemetery and placing a small American flag on a soldier's grave. If a friend or family member is a veteran or in active service, pick up the phone and give them a call. Even a text message or e-mail can make that person know you're thinking of them, and the sacrifice they made on your and the nation's behalf.
The Veterans of Foreign Wars Post 3208 will hold an 11 a.m. commemoration this morning at Pioneer Cemetery. It is a moving ceremony, and if you've never attended before, perhaps this is the year you'll set aside an hour or so and stop by. It both honors those whose service to this country is recent and remembered, yet also carries on a tradition with its origins all the way back to the beginnings of our country. A time that can now only be recalled through history books, and occasions such as this one.
City Councilmember MaryAnn MacGillivray will once again do the keynote address honors.
http://sierramadretattler.blogspot.com
Posted by The Moderator at 12:00 AM