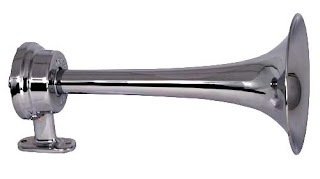 The following was posted in the comments section yesterday, and it is in regards to Thursday's post about certain erroneous claims made in Kiwanis Magazine. It strikes me as being very informed and authoritative, and I thought it should be highlighted here. This answers some of the questions asked by us earlier this week, plus it sheds some new perspective on how this project evolved originally. It also has the distinct ring of truth, something so sorely lacking in the Kiwanis Magazine account.
Didn't get a chance to post this run down with the Tattler's post on the emergency radio station, but ...
Members of the Sierra Madre Fire Safe Council attended a post-Montecito/Santa Barbara fire symposium and learned that they thought an emergency radio station would have been of service when the reverse 911 was insufficient during their fire season.
George Maurer had for some time advocated that the old fire horn could be renovated and used for emergencies. Kiwanis pledged to pay for the renovations.
Sierra Madre Fire Safe Council took on the task of raising the matching money for the city portion of the radio project as it was a non-profit 501 (c) (3) and the local Kiwanis chapter was not. Donations through the Kiwanis would not garner the donor a tax deduction.
Hank Lansburg gave his expertise to help the city site the radio tower and found sources to reduce the overall expenses for the project.
Susan Henderson, as President of the Kiwanis, asked for the Kiwanis to be involved in the fund raising, but all the club did was provide a brochure and the connections through Hank and George.
The horn was not operational at this time and needs further repair. Old horn, old parts are hard to come by.
The emergency radio station, 1630 on your AM dial, can be heard as far east as the 605 split, and from the 210 as far as the Fair Oaks exit.
We will be posting more information on this situation as it develops.
The L.A. Times Investigation Into Water Corruption
Water, as we all know, is the liquid gold that greases the wheels of so much of what government does around here. Here being a heavily populated near-desert located on the far western edge of the American Dream. And for as far back as anyone can remember water has been the source of many political shenanigans in L.A. County. Head down to Blockbuster and rent yourself a copy of Chinatown if you don't believe me.
And it looks like Bell Scandal connected individuals have also been intimately involved in the water business. With millions of dollars being funneled to those willing to play political ball with them in exchange for lucrative contracts and other tangible benefits.
Oh, and also keeping their lips zipped. Secrecy always being a very important component of corruption.
It's good to see that The Times continues to bear down on corruption in LA County. The Bell revelations were important, but are hardly much more than the tip of a rather immense iceberg.
Here is how The Times introduces its latest revelations:
Water district gives millions in contracts to politically connected recipients - Those people and organizations have helped the Southeast Los Angeles County agency fight critics and avoid outside scrutiny.
A water district that serves southeast Los Angeles County has awarded millions of dollars in contracts to politically connected individuals and organizations, which have helped the district fight critics and avoid outside scrutiny, public records and interviews show.
The Central Basin Municipal Water District's relationships with state legislators, a former mayor of Bell and other political insiders have enabled the obscure utility to accumulate clout in Sacramento and in the industrial corridor along the 710 freeway.
The entire article can be accessed by clicking here. Interesting reading, and some colorful background for those who are following developments in the water shenanigans that have happened here in our little corner of the County.
As long as we're reading LA Times corruption stories this morning ...
Here's a little item that should be of interest:
Budget warnings went unheeded in Compton - City officials pursued plans to revive Police force as finances worsened. Now layoffs are being considered
Click here for the report.
http://sierramadretattler.blogspot.com
Posted by The Moderator at 7:50 AM