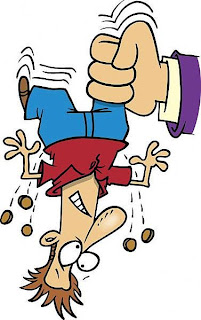 There was a bit of a debate about our UUT tax rate Tuesday evening between MaryAnn MacGillivray and an obviously well rehearsed Team G4-1. Because of the Sunset Clause wisely attached to the first version, MaryAnn is in favor of putting Measure U back on the ballot next April because, in her opinion, our status as a full-service city would be in serious jeopardy if we did not. However, she also claimed that this tax should be capped at 10%, and that if any cuts needed to be made to facilitate this, so be it. We do need to live within our means, particularly in times as tough as these.
This triggered an interesting reaction amongst the Bobbleheads. With their Pavlovian "If MaryAnn is for it I am against it" cues all firmly in place, they began to chatter about a 12% UUT rate as being not just acceptable, but also something that we, as the people who would actually pay it, should be happy about. Josh Moran going so far as proclaim that we should be glad to pay it in exchange "for all that this City gives back to us." An odd way of looking at things in my opinion. Since when should people be expected to express excess gratitude for services that they are already paying money to receive?
This is not a viewpoint that I am particularly comfortable with. I thought that paying tribute money to governments went out of style in this part of the world around the time George Washington was President.
I also found this to be a very curious way for them to announce that they intend to not only raise our taxes, but be happy doing it as well. And while it is nice of them to let us know something this important before an election for a change, usually they are not so revealing about their real intentions. Should we take this as an indication that the Sierra Madre Police Officers Association negotiations are not going as well as we'd all hoped?
And then there is this other problem. As we discussed in a post on this site back on October 11 (which was the same day Joe Mosca announced his plans to leave the country, and therefore kind of got buried in all the celebrating), at 10% Sierra Madre is paying just about the highest UUT rate in the State of California.

The chart just to the right can be better seen by clicking here and then scrolling down a little. What this graph shows is how each of the 146 cities paying a UUT stack up with the rest. As you will see, most cities are somewhere in the three to six percent range. However, if you look all the way to the right you can see how many cities are paying our current 10% rate. There are only two cities in that category. One is Sierra Madre, the other is, believe it or not, the City of Bell.
However, and as I am certain you will be relieved to know, Bell only pays a UUT on about half of the categories that we are paying. Which on a percentage basis makes us the #1 UUT rate paying city in all of California. Congratulations, and go enjoy your services.
You might also note that on this graph there is no 12% category. So if we should have our UUT rate increased to that lofty level, we would literally be "off the chart."
The source for this information is something called the California City Finance Utility User Tax Facts Report. It has lots of interesting UUT facts, all of which point to our being way out of line with what the rest of the state is paying in Utility Taxes. Again, you can check it out by clicking here. And to track the UUT rates that other California cities are paying you should click here.
Of passing note, today's date is 11.11.11. Which does have quite a nice symmetry to it. And while I am certainly superstitious, I do not find much more significance in it than that. But drive carefully anyway. It is always good to be cautious.
http://sierramadretattler.blogspot.com
Posted by The Moderator at 4:00 AM