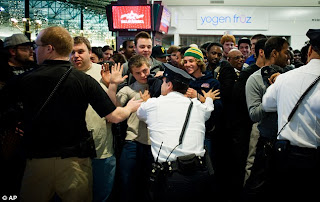 I was out riding my bike with the missus yesterday afternoon and we couldn't help but admire the industry and care that was going into creating the Dickens Village celebration downtown. Sierra Madre's historic creche has been beautifully restored, the work of local artists. You really need to see it. Colorful shopping kiosks and tables were being set up in Kersting Court, stores were all decked out in their Christmas finest, and the spot where kids would soon be hanging out with Santa Claus and getting their wish lists heard was in place and just about ready for business.
Which is why this Yahoo News article (click) I am posting here seems even more unbelievable than it already is. The contrast between the cheerful serene atmosphere of our downtown shopping district and what went on elsewhere over this long 4-day holiday weekend couldn't be more stark or disturbing.
How much crazier can Black Friday get? Pepper-sprayed customers, smash-and-grab looters and bloody scenes in the shopping aisles. How did Black Friday devolve into this?
As reports of shopping-related violence rolled in this week from Los Angeles to New York, experts say a volatile mix of desperate retailers and cutthroat marketing has hyped the traditional post-Thanksgiving sales to increasingly frenzied levels. With stores opening earlier, bargain-obsessed shoppers often are sleep-deprived and short-tempered. Arriving in darkness, they also find themselves vulnerable to savvy parking-lot muggers.
Across the country on Thursday and Friday, there were signs that tensions had ratcheted up a notch or two, with violence resulting in several instances.
A woman turned herself in to police after allegedly pepper-spraying 20 other customers at a Los Angeles-area Walmart on Thursday in what investigators said was an attempt to get at a crate of Xbox video game consoles. In Kinston, N.C., a security guard also pepper-sprayed customers seeking electronics before the start of a midnight sale.
In New York, crowds reportedly looted a clothing store in Soho. At a Walmart near Phoenix a man was bloodied while being subdued by police officers on suspicion of shoplifting a video game. There was a shooting outside a store in San Leandro, Calif., shots were fired at a mall in Fayetteville, N.C., and a stabbing outside a store in Sacramento, N.Y.
If you go over to Youtube and type in the words "Black Friday," dozens of shocking videos showing chaos and mayhem become immediately available for your viewing. As an example, if you click here you can witness what went on at a Walmart not that far away in Porter Ranch.
Later that evening we decided to walk with our kids (and their friends, which our house seems to attract far too many) downtown to Mother Moo Creamery. A place that serves handmade ice cream they now ask for a lot. And because we were there I can tell you that there were no such scenes of mayhem or chaos in Sierra Madre last night. The shopping was orderly, the crowds convivial and happy, the streets brightly lit and cheery, and none of us were either pepper-sprayed or arrested.
The only real danger that I was able to see was the possibility of tipping over on the authentic snow sled run set up on the incline next to the Bank of the West.
Which is why I will be doing my Christmas shopping in Sierra Madre this year. I'm not going to take any chances out there past the Michillinda Curtain. Nobody should. It is far too dangerous if you ask me. I don't know how you see all of this, but I'm staying right here.
http://sierramadretattler.blogspot.com
Posted by The Moderator at 4:45 AM