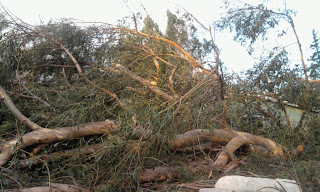 I have been getting a lot of calls on my cell phone because of the interesting condition of my house after all the wind Wednesday night. We spent much of the day greeting concerned friends and neighbors out in front of the place because, and let's face it, the place is quite a sight. It looks like a war broke out, one that we didn't win.
Also the missus and I were interviewed for KCAL 9 and ABC Eyewitless News, and a lot of people have now seen that. I suspect that tomorrow we could probably clean up selling lemonade. We will also be having a sale on eucalyptus firewood in the not too distant future. If you are not aware, the smoke it gives off is considered to be quite fragrant. 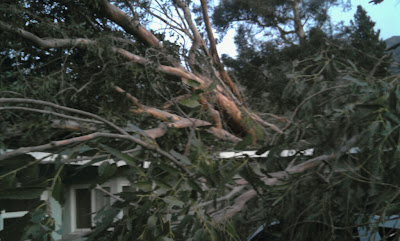 The story is that the far uphill corner of Grove Street was hit by some of the fiercest winds in the area. It has been estimated by folks who claim to know this stuff that the howling vortex that squeezed down through Bailey Canyon was at times over 100 miles per hour. The grove of eucalyptus trees that used to stand just above my house couldn't quite withstand the onslaught, with the result being 3 of them fell on or near my home. Including one bad boy that hit my garage and stretches all across the house and over into my neighbor's yard. A fourth tree, a magnolia that used to shade our backyard, is down as well, taking a portion of an enclosed back porch with it.
It was an extremely wild night at our place. And needless to say, our views of the mountains have improved.
One of the odder things I noticed, and this is after I finally ventured out there into all of the howling chaos, is that the tree that landed on our house actually gave off a mist for the first few hours. It was almost like a rain. Tree tears, as one neighbor later put it.
The City of Sierra Madre has red-tagged us, which makes sense. There is something about a house with a 16 ton eucalyptus tree on top of it that does raise eyebrows, I suppose. I am posting all this from the Hilton in Pasadena. A stay paid for by the insurance company, which has been very cooperative about everything. Their business-like Sierra Madre based representative stopped by yesterday, approving all of the excitement that we have planned for today.
Our next door neighbors (they moved here from England a month or so ago) also have a eucalyptus tree on top of their house, and between us a crane has been hired to lift both of them off. A contractor who specializes in that kind of thing has arranged for something large to show up early this morning and do all that. Two tree climbers have also been hired, a line of work I had no idea existed. One of them told me that he has been looking down on the world now for 16 years.
Once the tree is off our roof The City will change the color of our tag to a far less troublesome yellow, and as long as we promise to stay out of the garage and back porch we will be allowed to return to Rancho Apocalypse. The structure of the main part of the house miraculously surviving unscathed, or at least that is what we think now. That could change after further review, of course. But we are optimistic.
All of us are fine. A little achy as we had to clear the driveway out yesterday. A friend with a buzzsaw stopped by and we managed to clear a path so that we could get the cars out. They received some interesting dings, but can still be driven. As a matter of fact, both now have that vintage well-used Sierra Madre look that typifies many of the vehicles around here. I will drive mine with pride, though I suspect things could get interesting when it rains.
That's the news. Hope things are well with you. Updates as they arrive.
http://sierramadretattler.blogspot.com
Posted by The Moderator at 4:30 AM