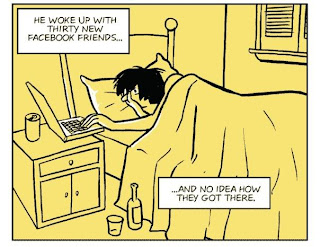 There are people who pride themselves on the amount of "friends" they have on their Facebook page. Some have literally thousands of them, and honestly I don't know how they remember all of those names. And when they have all their friends over to the house for a get-together, the costs of the refreshments alone have got to be staggering. Cleaning up after them must be a considerable chore as well. How exactly do you recycle virtual red Solo cups?

Plus there are those who literally beg to be "liked" by other Facebook account holders, which has always struck me as kind of an unsolicited admission of neediness on their part. And then when they get what they've asked for and have thousands of "likes," take it as a form of validation of their worthiness as a person, company, or whatever it is they're currently claiming to be. Which does raise some personal authenticity issues.

But what if a significant portion of those friends never really existed, and whatever it is that said they liked you doesn't really qualify as what most of us would regard as an actual living and breathing person? Or what if some of these people have actually "fake liked" themselves, something that concerned experts are now claiming can be a form of virtual self-gratification?

According to a shocking new account by BBC News Technology (click here), much of this just may be the case.

Facebook has more than 83 million illegitimate accounts: In company filings published this week, (Facebook) said 8.7% of its 955 million active accounts broke its rules. Duplicate filings - belonging to already registered users - made up 4.8% of its membership figure.

User-misclassified accounts amounted to 2.4% - including personal profiles for businesses or pets - while 1.5% of users were described as "undesirable."

Facebook, whose business model relies on targeted advertising, is coming under increased scrutiny over the worth of its advertising model which promotes the gathering of "likes" from users.

Last month, the BBC technology correspondent Rory Cellan-Jones set up a fake company called VirtualBagel to investigate allegations of fake "likes." His investigation found that the large majority of "likes" for the fake firm originated from the Middle East and Asia. Many users appeared to be false, such as "Ahmed Ronaldo," - apparently a Cairo-based user who is employed by Spanish football Real Madrid.

Last week, digital distribution firm Limited Press alleged that, based on its own analytics software, 80% of clicks on its advertisements within Facebook had come from fake users. In a post on its Facebook page, the company said: "Bots were loading pages and driving up our advertising costs. So we tried contacting Facebook about this. Unfortunately, they wouldn't reply.

Without naming any names, it does appear that we might have a few of these Facebook "undesirable users" right here in town. This blog, to use an example, came under considerable attack from a couple of them during last April's election.

Some of this might seem arcane to the casual users of Facebook here in Sierra Madre, but I do have an anecdotal account to share with you. A long time ago I established an "Eric Maundry" page for some reason that now escapes me. I went back and checked it recently, and found that there are now over 1,000 people lined up who want Eric to "friend" them. If that is the correct use of the terminology. With many of them not even from this side of the planet.

Which is kind of bizarre if you think about it. Over 1,000 people want to becomes friends with someone they've never even heard of, a fictional entity that doesn't really exist. I never knew there was quite that much loneliness in this world.

And as if all of that isn't bad enough, there is this from BusinessInsider.com (click here):

Facebook Stock Crash Hoses California's Tax Revenue: Now, it's the State of california, which apparently overestimated how much tax revenue it was going to collect from Facebook employees after the IPO.

According to Bloomberg's John Erlichman, California is now saying its "tax revenue is at risk" because it assumed it would get $1.9 billion from newly enriched Facebook employees. But now those Facebook employees are only going to get about half as rich as they would have if the stock were still trading at the IPO price.

And that means that California - and the Federal government - are likely to collect only about half as much Facebook-related tax revenue as they thought.

I honestly don't know which is worse, false friends or non-existent virtual tax revenue. It would seem that hardly anybody is doing reality anymore.