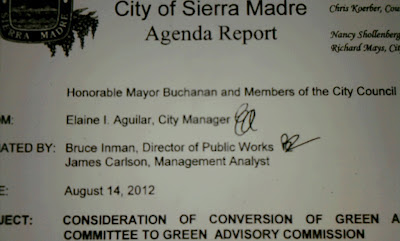 I don't know if Josh Moran's term as Mayor of Sierra Madre has been all that forgettable. After all, he was handed an historic defeat on his attempt to illegally circumvent Measure V in regards to the Kensington matter. And then, once it became obvious that his efforts had gone nowhere, laughably attempted to convince the City that he was for the vote the entire time. This despite God knows how much in City Attorney fees were spent, and on his authorization, in the attempt to convince the Planning Commission that a unit was actually a suite. As if language changes could somehow obviate a voter approved law.
However, it appears that, at least for City Staff, hearts still beat true for the departed Mayor John "Edison" Buchanan. Especially when it comes to his beloved Green Committee. Edison, of course, as one of the leading bulk greenhouse gas producers on this continent, is often a strong supporter of "green initiatives." I mean, why wouldn't they want to use the language and culture of the environmental movement to promote things such as high-density development in ostensibly green low-density communities such as ours? It is both good for business and public relations. And after all, we do live in Orwellian times.
The effort to elevate the Green Committee to a "Green Commission" is, according to their rather grandly entitled "Green Accords," driven by a pro-development agenda very similar to that of the old DSP crowd. The very kinds of development that were rejected by the voters when they passed Measure V in 2007. The following is what can be found at the faux green heart of these so-called "Accords."
Urban Design (Action Number 21): Adopt urban planning principles that advance higher density, mixed use, walkable, bikeable, and disabled-accessible neighborhoods, which coordinate land use and transportation ...
I don't know of anyone who is opposed to walking and biking, especially when it is somebody else that is doing it. But why would the people of Sierra Madre, who have time and again expressed their desire to keep this town as it is, want to adopt anything that promotes high density and mixed use development? Or elevates in status the people actually promoting such a thing?
As is also stated in the Green Accords, the Green Committee recognizes that the inclusion of this language in the General Plan is dependent upon the General Plan Update Committee taking their lead and adopting this junk. But what if the Green Committee were to be made into a full Commission, a body with far more authority than it has now? Would they then be in a better position to force language promoting "higher density" and "mixed use" development protocols into the General Plan?
Which is probably why this particular agenda report was addressed to a guy that hasn't been Mayor since last April. It smacks of his decidedly Machiavellian approach to running this city.
Caltrans apparently also believes that anything can be called "green"
When it comes to greenwashing decidedly anti-environmental initiatives, Caltrans is no slouch, either. If you think that the call to enable high-density mixed use development in the name of "green practices" is grotesque, then how about the Caltrans argument that freeway construction promotes clean air? This from LA.StreetsBlog.org (click here):
Derision Grows for Caltrans 710 Study That Argues for Massive Road Widening for Cleaner Air - When Streetsblog first looked at the alternatives proposed in 2009 for reducing congestion along the I-710 Corridor in Long Beach, Compton, South Los Angeles, Watts, and east Los Angeles, staff was already pushing for adding four lanes to the existing ten mixed use travel lanes. This would add four highway lanes along the already choking 18 mile corridor to an area already choking on exhaust fumes.
72 miles of freeway lanes ... in the name of cleaner air. Only in California.
Of course, this is the same Caltrans that wants to build the 710 Tunnel, which would then extend this ecologically ruinous corridor through Pasadena and right past Sierra Madre.
High density condo development is green, and freeways promote cleaner air. Only in California, indeed.
Happy Friday.
http://sierramadretattler.blogspot.com
Posted by The Moderator at 5:00 AM