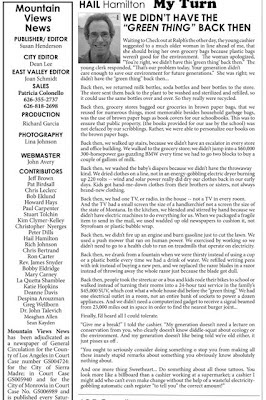 Hail Hamilton, as I am certain many regular Tattler readers are aware, gave one of the nastier speeches ever delivered in this town. Which is saying a lot. The occasion was the 2010 City Council Reorganization, and as the biggest mouth from the ugly mob attending the seating of the so-called "Civility Council" that fateful evening, Hail spun one of the most bizarre screeds ever heard in Council Chambers. If you have yet to witness Hail's walk on the wild side, you can link to it on the Neuroblast Films site by clicking here.
Hamilton was later widely condemned for this little speech, even by those whose favor he was trying so hard to obtain. Later he published an apology of sorts in the Mountain Views News, but even there he showed some confusion over all of the criticism. After all, he didn't say anything that hadn't been quietly passed around by the Civility Slate and its supporters during the election campaign. The residue of which, by the way, is our current Mayor and Mayor Pro Tem. Perhaps the most inept and unqualified this City has ever seen, which is also saying a lot.
But so much for the memories. In this week's Mountain Views News, on its op-ed page to be exact, regular columnist Hamilton published something that at first pass seems pretty good. Entitled "We Didn't Have The 'Green Thing' Back Then," it details quite eloquently some of the generational biases and foibles shown in today's heated discussions over what it means to be "Green." With, in this case, the older generation coming off quite favorably. Especially when compared with some examples of the ham-handed hypocrisies evident in the youthful hubris shown by certain segments of Greenie crowd.
As a matter of fact, it appears to be one of the best columns Hail Hamilton has ever written for that paper. Which is where the problem lies. Even though he published this piece under his own name, and under the column's usual masthead, Hail did not write it. Instead he took it from somewhere else and claimed it for his own.
The first instance of "The 'Green' Thing" column that I can find was published in a New Left kind of publication out of Columbus OH called The Free Press. Their quaint motto being "Speaking Truth To Power Since 1970." The author of the Free Press piece is a Denny Roberge, and his column was committed to print on August 8, 2011. Or more than a year before Hail Hamilton laid his claim to it. You can verify this by clicking here.
Sometime after that date this word stack went viral. Many other publications picked up on the piece, and it also became the stuff of widely circulated e-mails and Facebook postings. I received a copy in an e-mail at work, which is why I recognized the misappropriation when I saw it in the MVN.
If you go to Google and type in the title of Hail's filched column, you will witness page after page of references and links to this piece of writing. It is quite obvious that Hail Hamilton did not write it.
Yet another low for our adjudicated weekly, the Mountain Views News. There have been so many.
http://sierramadretattler.blogspot.com
Posted by The Moderator at 6:00 AM