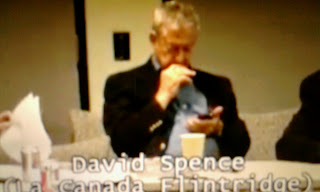 As you might recall from an article we posted on The Tattler a few months back, when the Governing Board of the San Gabriel Valley Council of Governments (aka "The COG") settled its lawsuit over multiple Brown Act Violations,  a considerable amount of money was handed over to Gil Aguirre for legal expenses he incurred while bringing these miscreants back to within the paths of the righteous. After all, it was done for their own good.

But as a part of this settlement it was also agreed by all of the parties involved that the members of The COG's Governing Board would also undergo a session of Brown Act training with a paid expert in this law. Here is how all of this was described at the time (click here):

Now if there was ever a need for a Brown Act review session by a legislative body, the SGVCOG Board might qualify as the poster child for such training. Litigation was filed last year against the agency alleging what can only be described as a litany of past and ongoing violations. Lapses such as: holding unauthorized secret meetings, preventing members of the public from speaking during meetings, failing to post agendas for meetings, and discussing items of business which were not on the agendas. I'm sure you get the idea.


So how did our Coggly Scholars fare at Brown Act School? Not very well I am afraid. On October 18th video cameras were on hand to record this rather historic event, and some of the shocking footage that was taped that evening is now available. Click here to view their shameful shenanigans in all of their infamy.

Rather than taking in the wisdom of their Brown Act instructor (which they obviously are in bad need of), some of these San Gabriel Valley Council of Governments executive members instead saw fit to spend their class time texting and e-mailing with their friends. Just like the bad boys and girls might do at a high school.

There is a bright side to all of this, however. Everything they texted or e-mailed during Brown Act class belongs to the public. None of it can remain hidden should someone wish to file a Public Records Act request. Which is exactly what we intend to do. When we get our copies of these miscreant e-mails and texts we will post them here on The Tattler.

Because if there is one thing we believe in at The Tattler, it is that the works of our public officials need to be fully transparent and on view for all to see. Even if they were the result of playing hooky.

The Patch Reports on the City Council's COG Deliberations

Last Tuesday evening there was a City Council meeting, and among the pertinent topics under consideration was whether or not we should remain in The COG. And there were some very good reasons for the City of Sierra Madre to get out. Not only has its Governing Board proven to be serial violators of California's signature transparency law, the Brown Act, but also its most notable figure, SGVCOG Senior Director Nicholas "Nick" Conway, was hauled off by the District Attorney on various felony conflict of interest charges involving vast quantities of the public's hard earned tax dollars.

There is also the matter of The COG footing the bill for Nick's legal expenses, which could run as high as a million big ones. Plus should Nick sue over various perceived slights by The COG during his times of legal travail, he could walk away with millions more in our money. Plus there is also the matter of misspent tax money being clawed back by certain aggrieved public agencies. Something that could put Sierra Madre at risk for having to pay vast fortunes in public moneys that we just don't have these days.

All of which contributes mightily to my mystification over our City Council voting 5 - 0 to remain a part of this disgraced organization. Given The COG's recent legal disasters, it does not set a very good example for the children. That there were no consequences here for such ethically bereft behavior is certainly not the right signal to send to our youngsters.

However, I guess I will just have to deal with my pain as I always do, which is to drink a lot of coffee and write about it on my blog.

Over at the now rudderless Sierra Madre Patch a new reporter has shown up on the scene. Her name is Connie K. Ho, and she is turning in some fairly workmanlike articles. They are both well written and informative. Of course, they also have that cloying "tell us your thoughts in the comments!" non-committal feel to them, but I suspect that is due to certain Aol/Patch corporate style requirements and is not Connie's fault.

This week Connie turned in an interesting news piece entitled "City Council Votes to Continue Membership in San Gabriel Valley Council of Governments." And contained within this article is the following rather priceless observation from Sierra Madre Mayor Pro-Tem Nancy Walsh:

“The year has been incredibly difficult, really tense,” said Nancy Walsh, Mayor Pro-Term who serves as an alternate liaison to SGVCOG, on the challenges following the allegations on Conway and the reorganization of the group. “Now there’s an amazing energy. If we can get through whatever legal battle, [the SGVCOG] will definitely be stronger… this little city cannot get along without it.”

I guess if by "amazing energy" you mean giving Nick Conway a quarter of a million dollar golden parachute funded in part by our tax money, then yes, The COG has indeed been quite peppy. The COG has also shown astonishing vigor in covering Nick's legal expenses, which includes a fine attorney that commands upwards of $1,000 an hour. And should Nick sue The COG and prevail, I am sure this organization of energetic men and women will virtually sprint to Sierra Madre for some cash to help defray their expenses.

This was not a particularly glorious moment for our City Council. I need some more coffee.