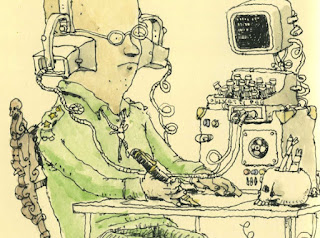 As you already know next Tuesday we will witness what is going to be the beginning of a multi City Council meeting attempt to sell the idea of a "Green Commission" to the people of Sierra Madre. What on the surface appears to be a group of folks in favor of such wonderful things as flowers and trees becomes, upon further examination, an attempt to cozen in the kinds of DSP development that were rejected in the voters in 2007. The people who are pushing Commission status for this bunch are all of the usual pro-development suspects, and apparently believe that if they can greenwash that old tired nonsense enough they'll somehow be able to sneak it through this time. It is a strategy designed to bring back what was  a divisive and difficult time for this City, and in some ways has never gone away.

OK, you've heard all of that from me before. So here's my actual point for today. Whether or not you agree with what I've said above, this is a Sierra Madre issue. We can discuss and decide whether or not the kinds of high-density downtown Transit Village development called for in the Green Committee Accords is right for us. It is a discussion that involves the future of our City, and as such it shouldn't be about anything else.

Unfortunately, that is not how the conversation always seems to go. Because marginally related national, and even international, political issues have been injected into this debate. Most of them completely irrelevant to the discussion about the future of Sierra Madre that we should be having. A truly important topic is in danger of getting buried beneath a lot of stuff that is totally besides the point.

Let me give you two examples from yesterday's comments. Here is the first:

The radical environmental movement was borne by socialists who, rather than admit the dismal failure of their ideology, rationalized that the only reason capitalism didn't fail is because evil capitalists exploit the environment ... If you notice, the only sources Marxists support are those which can't be used on a large scale, wind and solar.

This got roundly lambasted in the comments that followed, but I didn't think it was without value. Let's face it, take away the Federal and State subsidies for renewable energy programs such as solar and wind power and they would likely disappear in a few short years. The real growth sector in the energy necessary for environmentally friendly electricity production is natural gas. Which has, ironically, also proven to be by far the most effective greenhouse emissions fighter to date (click here). It is a plentiful source of energy, brought to us by those Exxon/Mobil style corporations so widely reviled in certain quarters.

Here is a comment from the other side of the political spectrum:

That article is a pure disinformation campaign funded by the big oil companies and disseminated by those who want to discount the climate change we're experiencing. Even the superficial argument they present about temperature change is based on simplistic and erroneous interpretation. The true measure of climate change is the increasing levels of carbon in the atmosphere which triggers violent weather, increasing temperatures and increases in ocean acidification.

I see a lot of merit to this argument as well. The ice caps are melting, sea levels are slowly inching up, and it sure feels like it is getting hotter. We certainly have been repeatedly setting a lot of new high temperature records over the last 10 years. And with more nations catching up to the petroleum consumption levels of the western world, things won't be getting any cooler anytime soon. And try to talk them into giving up their cars. They just got them.

But here is the truly ironic thing. Both of these folks, the people who wrote the two posts I cited above, agree on something that is, in my opinion, very important. Neither of them wants to see the kinds of high density transit village development called for in the Green Committee Accords. They're both preservationists who treasure the kind of life we have here in Sierra Madre, and don't want to see it destroyed.

Yet because they have pronounced (to say the least) differences of opinion on some much discussed national issues, they are at each other's throats. Which is unfortunate. Because let's face it, there is not a lot you're going to do in your life that is going save the world. Even if you did know how to do it. But you certainly have the power to stop those who want to ruin this town.

Let me put it another way. If you think that the people behind the move to saddle us with this heavily pro-development so-called "Green Commission" wouldn't love to see the two preservationist camps in this town at each other's throats over issues that have little relevance to the topic at hand, then you are sadly mistaken.

To me the issue here is whether or not we are going to sit idly by while the same bunch of rather bitter downtown investors attempt to greenwash the old Downtown Specific Plan and finally sneak it through. All while getting you to pay for it.

And it is all about money. Never forget that.

Do not allow yourself to become distracted from what really matters here in Sierra Madre. This is not to say that those other things aren't important, because obviously they are. And if you guys want to go around to the back of the bar and settle your differences that way, I'll keep an eye out for the cops for you.

But trust me, none of that has anything to do with this latest attempt to turn our delightfully funky downtown neighborhoods into Rancho Cucamonga West.

Keep your eyes on our real prize. That other stuff will still be there long after this is all over.