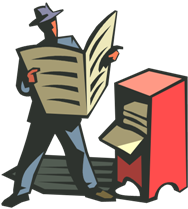 (Mod: This is the first time an opinion piece of mine has made it to the Sunday editions of the Pasadena Star News, SGV Tribune and Whittier Daily News. Significant as the combined readership of these 3 papers jumps to around 320,000, making it the most widely read post in my storied muckraking career.)

We here in Sierra Madre have begun to call it "this month's crime of the century." It isn't exactly the noisiest crime of the century since most people wouldn't vote in a Board of Education election even if you held a fully loaded howitzer to their heads, though there are those here who do actually care.

Under the too closely parsed legalities of Measure A, an initiative that passed everywhere in the Pasadena Unified School District except Sierra Madre last spring, only chosen special portions of the district will be allowed to elect new subdistrict representatives next month. Sierra Madre, along with certain other fragmented areas, having been booted off the Board of Ed until a later election in 2015. During this period our city will have no meaningful representation, with the dubious exception of a seventh of Tom Selinske. Or, even worse, perhaps an appointed Chris Chahinian.

That this will occur at so delicate a moment as when all of the remaining $240 million dollars in Measure TT school bond money is to be divvied up is troublesome. An effort in school rehabilitation spending that will be completed over the next two years by a new majority of Board of Ed representatives beholden only to their brand new subdistricts. District-wide Board of Education members, who theoretically cared about all of God's little PUSD children, going the way of the dodo.

But there is one option open to us. While we have somehow been proscribed from voting in the March election, or even an April runoff, no law has been passed so far by the PUSD that prevents us from talking trash about those running in the chosen districts. Candidates who, should they be elected, will likely treat our little voteless town like an unwanted stepchild.

Take the case of District 3 candidate Ruben Hueso. Ruben is very proud of his association with the Boy Scouts of America, so much so that he put a picture of himself on his very first campaign postcard dressed up in Scout leader regalia. Ruben also included a photo of Boy Scouts under his care saluting the flag in a classroom. Politically pleasing I suppose, but in direct violation of the Law of the Pack. The Boy Scout brass was not amused.

Also in District 3 is a youthful candidate named Tyrone Hampton. Tyrone is the only registered Republican running in this district, one where GOP'ers are as rare as residents who vote in Board of Education elections. He recently won the endorsement of the California School Employee Association, which is a union. Being politically ambitious, Tyrone showed up a few days later at the Green Street headquarters of TeaPac, proclaiming that he deserved their help because he is a Republican. Few politicians have the chutzpah to accept the endorsement of a teacher's union, and then go looking for something similar from TeaPac.

Our favorite is District 7 Board of Ed candidate Luis Ayala. Luis had presented the voters with a resume' that claimed a two year period of his legal career for "private practice." Something that came a-cropper when it was discovered he had instead spent that time in the employ of ICE, an organization that is not exactly beloved by recent arrivals to America.

Luis, it turns out, also sent his children to private school. The reason he gave, that the Linda Vista School had closed before his kids could enroll, was also discovered to be false. Luis closed escrow on his home in 2004, while the school in question wasn't shuttered until 2006.

Lots of fun, I suppose. But no substitute for having candidates of our own to kick around. Maybe next time they'll think of including us.