Yes, the City of Sierra Madre Really Does Have the Highest Utility Taxes in California

Sierra Madre has, overall, the highest utility taxes in the State of California. They are not just high, they are shockingly high. We will be talking about this a lot in the run up to April's election. With fourth man Noah Green's campaign having ground to what is pretty much a halt, the three new City Councilmembers are already for all intents and purposes elected. Which leaves only the fate of Measure UUT in question.

Today we are posting two charts from a report called Utility User Tax Facts, which was prepared in August of 2013 by a website called CaliforniaCityFinance.com (link). The first chart, which I've posted just above, shows the range of utility tax rates charged, and from all across California. To find Sierra Madre on this graphic, you would need to look all the way to the far right hand side of the chart. At 10% we would appear to be among those taxed at the very highest rates in the state. 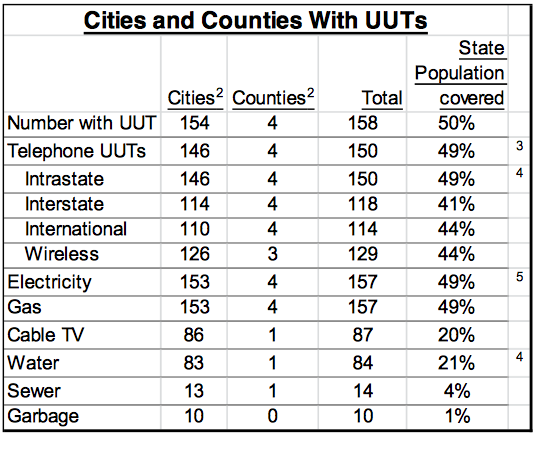 And had City Hall ever taken advantage of the 12% utility tax option as Mayors Buchanan and Walsh had hoped to do, you can see by this graphic that Sierra Madre would have literally been "off the chart."

So, you ask, how can we tell for certain that the City of Sierra Madre truly does have the highest utility taxes in California? Because you do know that there actually is a city that beats our 10% UUT rate by a full percentage point. That would be Culver City and yes, they do have an 11% UUT rate. In the categories that they do tax at this extremely high rate, they are reigning the utility tax kings. Even we can't touch that. Though we could have had we gone with that 12% rate Walsh and Buchanan wanted.

Using the MuniServices UUT tracker (link), we can identify exactly what the utility tax categories are in Culver City. Here are their numbers:

Sierra Madre doesn't have an 11% utility user tax. Again, ours is mainly 10%. So how can we be the highest in the state, you ask? Here are our numbers:

As you can see, while Culver City taxes five utility categories, the City of Sierra Madre taxes seven. Or every possible utility that can be taxed. This is how we maintain our position as the City that taxes its residents more for utilities than any other in California. We tax for two full extra classifications, and when combined that is more than enough to keep us at #1 in the most taxed for utilities category.

If you refer to the "Cities and Counties With UUTs" chart I've included above, you will get to witness two more interesting facts that will help to highlight just how extreme utility taxes in Sierra Madre are right now. For both residents and our largely at-risk small businesses as well.

In the category of sewers, only 4% of California's population is charged a utility tax. Out of the 154 cities taxing utility usage, just 13 of them do so for the use of city sewers. We are one of them.

And where we are extra special is in the 10% utility tax we charge for garbage. Only 1% of the residents in this state are socked with a utility tax for garbage removal. We are one of only ten cities doing that.

One other category where we are especially uncommon is water. While the chart shows that 21% of all California residents get hit with utility taxes on water, we are still in a special class. Ask yourself this. How many of those 83 cities that charge a utility tax in this category do so on water they themselves are selling to their residents?

In other words, the City of Sierra Madre taxes the exact same water that it sells to its customers. Our City Hall is working both ends of the transaction. I can't imagine there are that many cities capable of doing that.

Why are our utility taxes so high, and why is the City forcing us to endure a do-over UUT vote this April? After all, we did vote ourselves some utility tax relief in 2012, and overwhelmingly so. Which, when you think about it, also makes City Hall's do-over Measure UUT vote an unacknowledged attempt to raise utility taxes 25% in 2015.

City employee pensions could be one reason, and certainly benefits such as health care would be another. Sierra Madre, a city of less than 11,000 people, has a municipal government that apparently believes it needs to run its employee compensation affairs like the City of Los Angeles. This could be why City Hall failed to negotiate good deals for we the taxpayers with our city employee unions, and in the final result gave them among the richest benefit packages in the state.

This also clearly contributes to our having the highest utility taxes in California. This despite what the two pro-UUT City Council candidates holding our Police Department and library hostage have been telling you.

But that is a topic for another day. As one person posting on The Tattler commented last week, this pig is just too good to eat at one sitting.

http://sierramadretattler.blogspot.com
Posted by The Moderator at 5:30 AM