12:30 add - City Hall replies: Hello John, You have also emailed Chief Giannone and Chief Heydorff -- on behalf of both Chief Giannone and Heydorff, and myself, we did not approve or authorize the use of any photographs on any political mailings for or against Measure UUT, as that would have been contrary to law. Nor were City resources used to take, provide or forward any photographs, as this too would be contrary to law.    As you are aware, the City has no control over photos that are taken by members of the press or the general public.  Sincerely, Elaine Aguilar

(Mod: "Contrary to law." And to think is was the Mayor, their boss, that did this.)

Back to our regularly scheduled program: Yesterday we discussed the highly controversial "Yes On UUT" postcard and how the unfortunate abuse of uniformed Sierra Madre Police and Fire Department personnel found there, and in what was basically a political advertisement for a tax increase ballot initiative, was quite possibly a violation of California election laws.

If you click here you will be taken to a page titled "Police Officer Employee Rights in California." There is a section that deals with "political activity" and what is and isn't permitted by state law. Here is what it says about our topic for today:

The people responsible for both this postcard, along with the illegal use of the picture above (among others), is the "Yes On Measure UUT Committee." And who exactly comprises this committee? Would you believe it is headed up by the Mayor of Sierra Madre, Nancy Walsh? Here is this committee's CA Form 410 paperwork: 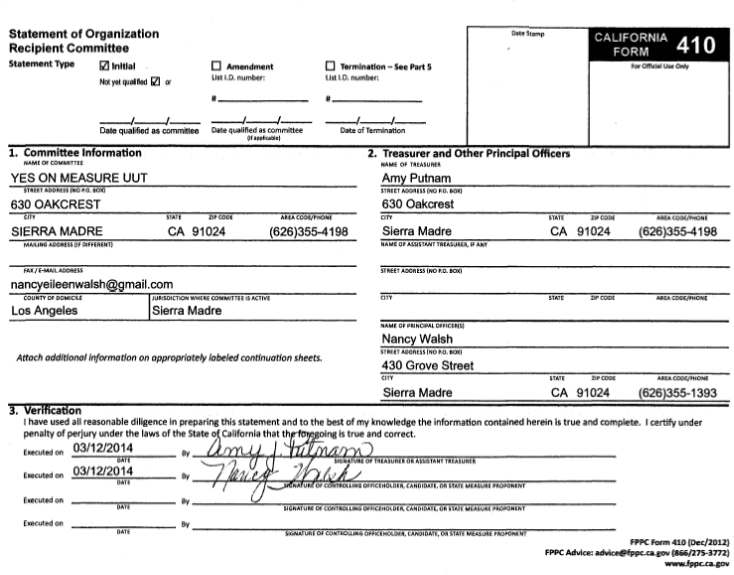 I sent out e-mails yesterday to Chief Giannone and Chief Heydorff, with a backup to City Manager Elaine Aguilar. My question to both of them being were they asked by this Yes On Measure UUT Committee for permission to use their images, and in uniform, for what is basically a political postcard. I have yet to receive any replies, which is understandable. I am not sure I would want to reply too quickly either. At least not without first discussing the "Yes On UUT" postcard situation with the City Attorney.

Since the YES On Measure UUT Committee is headed up by the Mayor of Sierra Madre, who may therefore be required to take her portion of the blame for exploiting our Police and Fire Departments for political purposes, this does put them in a bad position. After all, the perpetrator is also their boss.

My hunch is that the Mayor of Sierra Madre did authorize the use of photos of both Chiefs, and in their uniforms, for a political postcard without even bothering to ask them. Along with all of the other uniformed Police and Fire Department people who appeared on the Yes On UUT postcard.

In other words they were exploited by their rude employer for a political purpose. And in a way that may very well have violated state political campaign laws.

As employees I can't imagine they are feeling too comfortable about this right now.