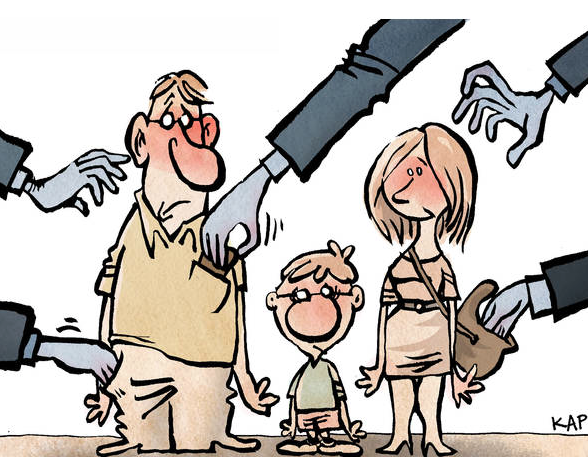 (Mod: When I was down in the Slough Of Despond last Tuesday evening for the counting of our votes, I couldn't help but notice the reaction of the gathered City employees to the defeat of Measure UUT. They were clearly in a state of stunned disbelief. Apparently none of them saw this one coming. And since then there has been some conversation among the supporters of this tax hike scheme about how so bad of a loss could have happened here. It is good to see that they also can enjoy a good conspiracy theory or two. But was the defeat of Measure UUT really all that anomalous an event for a California city such as Sierra Madre? According to a new poll from the Public Policy Institute of California, the answer to that one would be a rather clearly defined "No.")

California’s Taxing Dilemma (PPIC link) - As the April 15 deadline for filing taxes looms, we asked Californians in the latest PPIC Statewide Survey how they view their state and local tax burden. Their responses point to a disconnect between public opinion and the views of many fiscal reformers.

Further, a record-low 50 percent of Californians say that the present state and local tax system is very or moderately fair. In contrast, 57 percent said it was at least moderately fair two years ago. Across income categories today, perceptions of the fairness hover around 50 percent.

What changed in the last two years? For one thing, voters passed Proposition 30, temporarily raising the state sales tax, as well as state income taxes on wealthy residents.

Today, eight in 10 Californians say that major or minor changes are needed in our state and local tax system. But their views of change don’t necessarily match those of fiscal reformers, who have argued for years that our state budget is too dependent on wealthy individuals with volatile income tax payments. Some reformers have argued that broadening the sales tax base to include services would be an effective way to avoid the extreme ups and downs in state revenues that play havoc with state and local government budgets.

But Californians appear to have little interest in changing the tax system in ways that may impact their pocketbooks. Among four types of state taxes that we asked about in our March 2014 survey, six in 10 oppose extending the sales tax to services that are not currently taxed, and fewer than half favor extending the sales tax to services even if it means lowering the overall state sales tax rate. However, six in 10 would support raising income taxes on the wealthy, while about half favor raising state taxes paid by California corporations.

(Mod: Hopefully the "Yes On UUT" folks will see this report and stop taking things quite so personally.)

School board member Gloria Ramos on Thursday said although she wasn’t aware that the FBI has contacted at least one person with close ties to Centinela, she hopes the district will hire an independent auditor to look into Fernandez’s compensation, which exceeded $663,000 last year.

“We have to do a full forensic investigation,” she said. “This means going deeper, confiscating computers and emails. It means you might have erased something, but they will find it.”

(Mod: $663,000 a year for a school superintendent? And people wonder why voters turn down tax increase initiatives.)