The "Vote No On UUT Tax Increase" Facebook Page Lives! 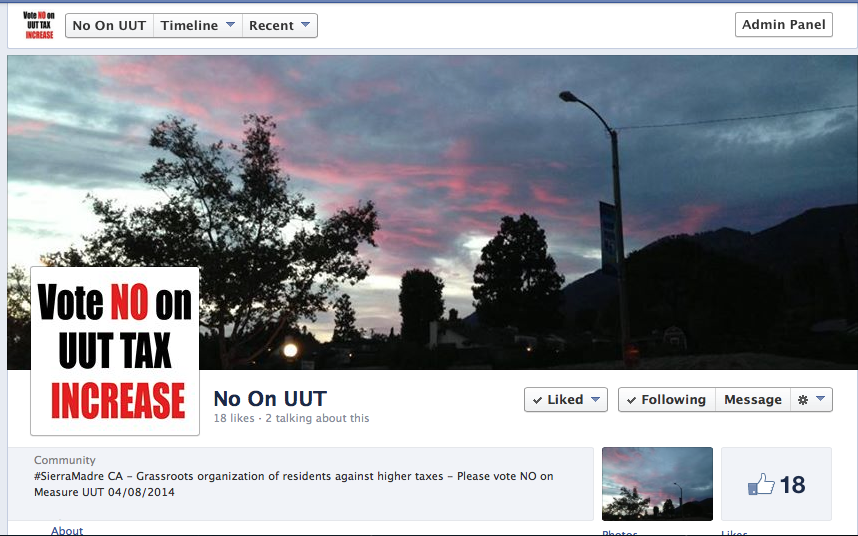 As longtime Sierra Madre Tattler readers have heard me say much too often before, I am not a big Facebook kind of guy. My take has always been if you want to communicate with like minded folks on the Internet, get all the way in and start a blog. Get your hands dirty, do your own digging, and write like there is no tomorrow. There is a tomorrow, of course. But that could all end some day. I've been told that by people who know a lot about such things. So you'd better start writing now, the end is near.

That said, I do have a Facebook page under the pseudonymous name of Eric Maundry. It is a bit of a mess, but I don't actually care too much. I started it so that I can post links to Tattler articles on other peoples' Facebook pages, especially those who don't agree with me. That is about it, though. I've never taken it much farther.

The thought that billions of people use this particular form of social media is sobering. But I also know that a lot of the people who read The Tattler have Facebook pages and enjoy them immensely. They communicate with their friends, swap pictures and gossip, snoop on the neighbors, and generally have a whole lot of fun.

And this No On UUT Facebook page is really kind of cool. Very informative and it even has a Tattler link or two. It is brand new as I guess you know, I think it has only been around for just a couple of days. But it is attracting a lot of attention in town already, and those behind it are looking to draw even more people to their site. Which is why they have asked me to write about it.

One of the page's features is a picture of Earl Richey's "No On Measure UUT" banner, which was displayed along Sierra Madre Boulevard in front of an apartment building he owns. As you know, this banner was stolen by local utility tax fanatics. The good news is Earl did eventually find it. The bad news is it was badly damaged and is taking some time to repair.

You can link to the No On UUT page by clicking here. And when you get there be sure to "Like" it. I am not completely certain what that means, but apparently if a site such as this particular one gets more "Likes," it develops a kind of magic power that makes it stronger. Like Popeye when he eats his spinach. Or, if you are on the "Yes" side, when a unicorn gets its sparkles.

Or so I've been told. Go and do it and let's see what happens. My understanding is if enough people "Like" it, we all get free winning California Lottery tickets. And wouldn't that help solve a lot of problems?

(Mod: The following was written by a Mr. Hugh Hemington.)

INCREASE!??? Get rid of it entirely!

If your city is incorporated (not a named area of a County), property taxes paid by property owners, residents, landlords or commercial businesses, fund your city. Learn where that funding comes from, how it is handled and where it is being siphoned off! A government that is convinced it can spend ANY of your money better than you, is convinced it can spend ALL of your money better than you.

Your city's UUT is likely a response to being squeezed by the state or county. Of course, money is fungible, so that "squeeze" may be manipulated too -- using funds for things only a small minority wants, starving things virtually everyone wants, knowing they'll agree to tax themselves AGAIN to get them back.

City councils shy away from fighting the state for funds because many believe "what can one city do?", and others want jobs in Sacramento, and know attacking them is a sure way of killing any future political career. As long as they can replace the lost revenue (or generate more) by taxing you AGAIN, they will, and the state will continue to bleed you and your city.

Let's face it citizen, you are at the bottom of the government motivation hill, with the state at the top, county right below, and city below that, and all their programs and desires are going to roll over you as long as you allow it to happen. If you don't push back, you're cooked. And if you let this duplicative taxation gain momentum, it'll be "the norm" and virtually impossible to reverse later.

(Mod: These two articles were posted right beside each other on the TotalCapitol.com site at 1AM last night.)

Economists: California drought impact to be minor (UT San Diego link) - California's drought won't dry up the economy, but it may slow job growth marginally if it persists over several years, according to a forecast released Wednesday that stresses the state's thirsty history.

"The fact is, aridity and recurrent drought, if expected or normal, are not a detriment to economic growth. Arid states in the U.S. over the past decade have not performed worse than their wetter brethren," said a section of the report by Anderson Senior Economist Jerry Nickelsburg. "Agriculture, industry, fisheries and households are not passive players in this game but react to drought-based incentives."

For instance, thanks to conservation, Southern California isn't using any more water than the region did more than 20 years ago, despite tremendous population growth, Nickelsburg said.

In a "normal" drought period, the expected impact of the drought won't have much impact on an economy with 16 million jobs, the report said.

Drought in California may hinder job growth for years, economists say (Los Angeles Times link) - The ongoing drought in California could dampen employment growth in coming years and have a ripple effect on several industries in the state, according to a UCLA report released Wednesday.

Economists said in the quarterly forecast that arid conditions in 2013, the driest year on record for the Golden State, could diminish the fishing and manufacturing sectors in the state. However, the effect depends on whether the drought is "normal" or the beginning of "a long arid period."

California's employment could be suppressed about 0.2% during the next few years because of the drought, the report concluded.

"If the drought is like the ones we had before, which are plentiful in California, then the data suggests it's not a big deal economically," said Edward Leamer, director of the UCLA forecast. "If this is really a climate change, that is a different story."

(Mod: A lot depends who you happen to be reading at the time, I guess.)