(Mod: I received this announcement yesterday from Preserve Sierra Madre, formerly known as the Coalition to Preserve Mater Dolorosa and Stop the Housing Project. It is some very big news for those interested in saving Sierra Madre from exploitative overdevelopment.)

Dear Supporters:​
The Coalition to Preserve Mater Dolorosa and Stop the Housing Project was formed shortly after the Mountain Views News broke the story on November 16, 2013 that the Passionists from Chicago were planning to sell off a significant portion of the Monastery land. Since that time, our Coalition has grown rapidly from just a few people to a large group of concerned citizens committed to the preservation of one of the last large open spaces left in Sierra Madre.

During the time of our growth, we came to realize that the pressures of over-development had come not just to Mater Dolorosa but to the entire city of Sierra Madre. In other words, Mater Dolorosa was only a small part of a larger problem.

In an effort to protect this beautiful "Village in the Foothills" from the relentless pressure of outside developers, we have decided to form a new organization with a larger focus. The name of our organization says it all:  Preserve Sierra Madre.

In furtherance of our new efforts, we now can be found on Facebook and we are constructing a new website with the domain: www.PreserveSierraMadre.com. Our new email address is PreserveSierraMadreNow@gmail.com.

Our new logo is: 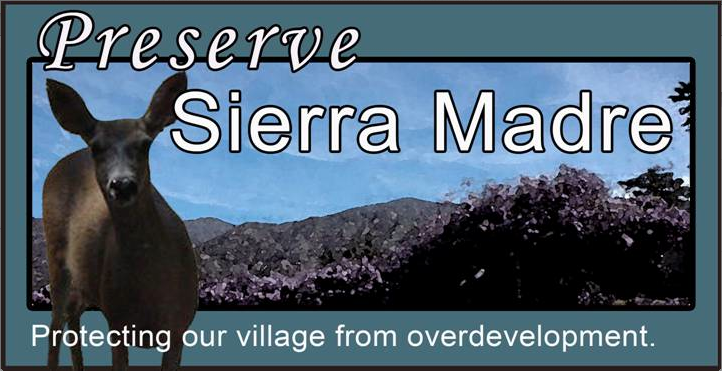 We will have two principles that will guide our efforts:

1. We want to protect Sierra Madre from over-development in which Arcadia-like McMansions and lot splits appears to be the primary threat at the moment.

2. While we believe in private property rights, we also believe that a developer should not be allowed to build a property that causes a reduction in value to neighboring properties.  In other words, the developer's gain in value by building the biggest house possible should not be at the expense of the neighbors who see a loss in value because their views, light, or privacy are adversely impacted.

The Coalition to Preserve Mater Dolorosa and Stop the Housing Project will still exist but only as an arm of the larger Preserve Sierra Madre organization.  Because of the moratoriums,  it will be somewhat dormant for the time being with Preserve Sierra Madre being at the vanguard of our new expanded efforts.

Finally, we want to thank each of our supporters.  Much has been accomplished in the ten months of our existence. Those accomplishments are due to the efforts, commitment and passion of the members of our Coalition. We will undoubtedly face an array of challenges in the future including from deep-pocket developers and their lawyers.

However, we will not be silenced or intimidated. Its all going to come down to whether we care more about preserving our city than the developers care about preserving their profits.  If everyone does a small part, we can prevail and preserve the Sierra Madre we know and love for future generations.

Thank you for your support.
Steering Committee
Coalition to Preserve Mater Dolorosa and Stop the Housing Project

(Mod: If I can throw in my two cents. The Preserve Mater Dolorosa group has been the most effective and professionally run new organization dedicated to curbing predatory and exploitative development here to emerge in Sierra Madre in quite some time. That they are now taking their efforts citywide is incredibly good news for everyone concerned about this important issue. We here at The Tattler fully support their efforts and hope you will as well.)