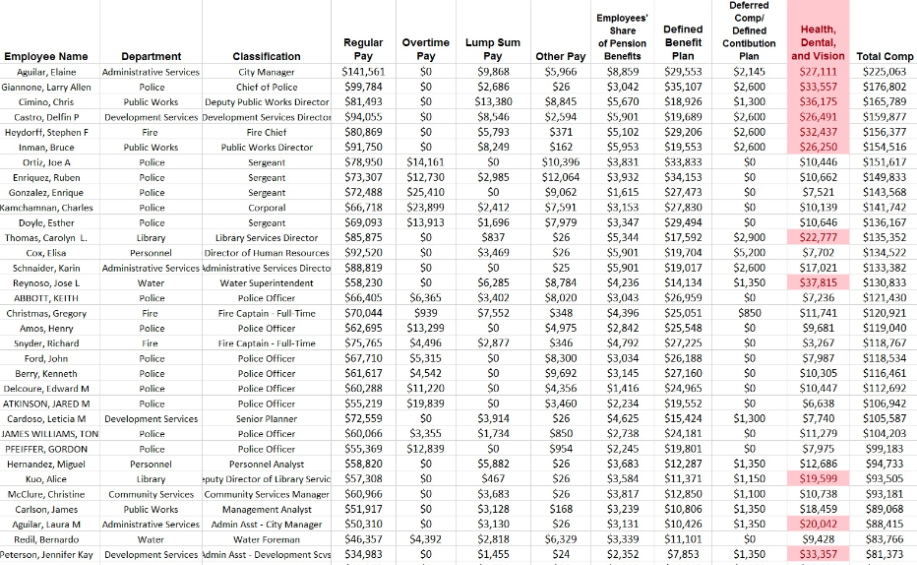 I suppose the City Hall types could have come right out and said that a lot of employees there could be getting some extremely large raises, but that would have probably been too easy. Nothing quite that clear ever makes it out of the Puzzle Palace. So instead we got a jargon rich ("compaction," "market value") sales pitch designed to make people believe that a lot of money is going to be saved. Oh, and that things are going to be organized a little better as well.

Why? Because the embarrassingly huge health care plan costs that were first revealed on this blog courtesy of TransparentCalifornia.com are going to be mercifully cut. That this little city was shelling out for health care plans costing upwards of $37,000 a year is beyond absurd. No other government agency in California has been doing such a thing. That this City did so while also wailing about how broke they were, and how badly they needed too raise our utility taxes to the previously unheard of level of 12%, is just unconscionable.

I don't expect we'll ever get an explanation for these shenanigans. Much less an apology for so aggressive and obvious fibbing, either. Quite the opposite, actually. It is my guess that there are those in this City who, given the chance, would do it all over again. UUT 3 might be just around the corner.

I have often wondered what the health care plan the Obama family receives might cost. I think it's quite possible that it is pretty much in line with the $37,800 health care plan our Water Superintendent over at the pump house currently receives.  Perhaps the highest costing government employee plan of its kind in California, and possibly even the entire country.

So anyway, while some health care cost cuts are being made, and that is a step in the right direction, just take a look at some of the the raises they might soon be handing out as well. These can all be found in the City Council Staff Report (click here). But let me warn those of you with weak hearts, reading the following numbers might not be right for you.

The City Manager's salary could increase by a little less than $40,000. The cost of Elaine Aguilar's health care plan would decrease by around $9,000. That would be a $31,000 pick up for our most senior City Hall official.

Bruce Inman's salary could increase from $107,724 to $134, 532. Quite a nice jump. Bruce's health care plan costs would decline from $26,250 a year to $18,000. Advantage Bruce. I am sure some of the spectacular success Bruce has experienced running the Water Department had a lot to do with it.

Chief Larry Giannone is hopefully coming out of his most recent bad patch, and he really did work the room most of last night. You know, just to show everyone just how on top of his game he is. And because there are no hard feelings, let's give Chiefy a $33,000 raise. Even though many cities would have summarily fired him for what happened last week, and justifiably so, at least he means well.

Here are a few more raises:

The rationale for all of this is that the management team of the Foothill Village must be brought to within 15% of what they would be paid if they worked for a city like Pasadena. That is, if they could be hired there. Even though their supposed equivalents in that city manage approximately 10 times the number of employees, along with exponentially larger amounts of budget and responsibility.

To put it in hotel terms, it is like comparing the General Manager of the Chateau Marmount in Hollywood to a guy who runs a Holiday Inn Express on Foothill Boulevard.

There is a silver lining to all of this. If the resolution put together by Denise Delmar and Rachelle Arizmendi passes, the health care plans get cut and the raises detailed above do not happen. With the exception of the Police and Fire Chiefs. If it does not pass, then anything is possible. The library ploy from former Mayor Rob Stockley last night was just the first salvo in the reaction to this effort. That old bloody shirt is now out of the safe and being waved around in the usual wild way.

And please remember this. These were raises called for by the previous City Council. We're talking about our ongoing Nancy Walsh hangover.

It is a very elaborate dance going on right now. How do you get the City Manager under control, and how do you hold off the old guard? You take away their money. This one is not going to be easy, or readily apparent at first. And the demagoguery of Stockley last night (all stuff we have heard before, btw) is a good indication of where exactly the opposition is coming from. Get ready for a long and bumpy ride. You're watching how government in this town gets changed, and for the good.

Here's the disconnect. On the one hand we're being told by City Hall we will be facing some very hard choices in two years because of the soon to sunset UUT, on the other massive raises could be doled out so we can keep up with the neighbors. Oh the cognitive dissonance.

Gene Goss, for whatever reason, nailed it. The people of Sierra Madre voted down UUT increases twice in two years because they wanted to see cuts. The taxpayers did this because they do not see the logic in paying the highest utility tax rates in California for services that do not matter to them.

Why doesn't City Hall want to understand that?