(Mod: There is a meeting at City Hall this evening that deals with the Internet and the safety of children. The Sierra Madre Police Department, along with their guests from the FBI, will be discussing that matter. However, there will also be quite a few parents in attendance who will want to discuss another child safety issue. That issue being the right of Sierra Madre's kids to reside in this community safe from sexual predators. An issue that Sierra Madre has been strangely lax about lately. Here is an article hot from today's issue of the Los Angeles Register (link) that should completely blow your mind. Assuming you have one.)

AWest, formerly known as Andrew West Reid, Jr, 60, served eight years in federal prison for molesting and photographing a 6-year-old girl. The victim was a friend of his daughter, who was also 6 at the time, court documents showed.

Due to the severity of his crimes, the former children’s television art director was required to register with local police upon returning home this month.

His current residence, publicly available under Megan’s Law, is just 544 feet away from Saint Rita Catholic School, which serves pre-kindergarten through eighth grade.

That’s four times closer than he should be to school-age children under state law. Local police, however, said AWest isn’t breaking any rules.

“We have looked very carefully at where he is living now and had long discussions with his federal parole officer,” said Cpt. Carlos Islas of the Sierra Madre Police Department. “At this point in time he is in compliance with the conditions set forth under state and federal law.”

(Mod: We need to stop here for a second because that statement is does not make any sense. Captain Carlos Islas is either completely unfamiliar with the law, or just doesn't care. What follows is a fact sheet from the State of California on Jessica's Law. I am posting a screen shot of the appropriate passages here.) 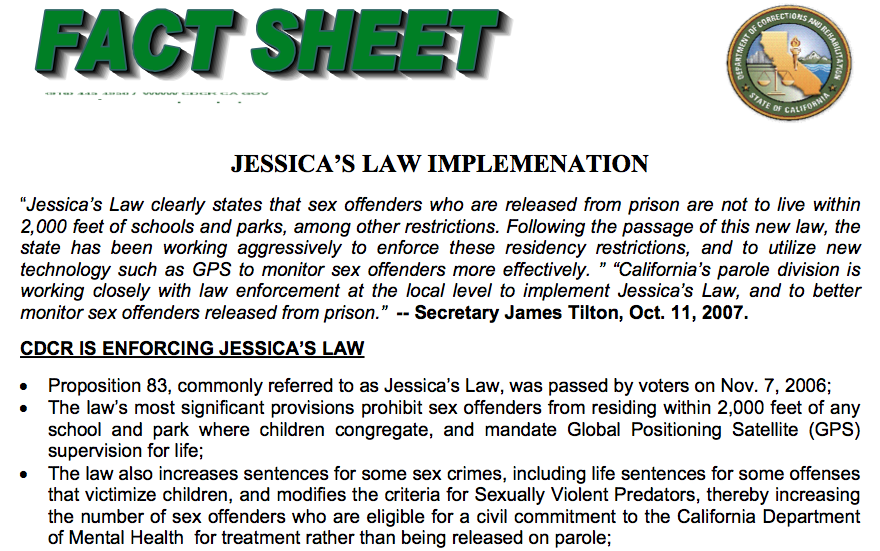 (Mod: So you know, within that range of 2,000 feet lie all of St. Rita's, The Gooden School and the Turtle Park. Bethany Christian School is right at the 2,000 foot line. Reid, who was convicted and sentenced to eight years in prison for sexually assaulting a six year old girl, has somehow been deemed fit by the SMPD to live as close as a tenth of a mile from such places. Sites where children the same age as his victim congregate on a daily basis. Here is the rest of The Register article.)

Local parents who know the victim and her family said that she was a student at St. Rita’s eight years ago. However, AWest did not gain access to the young girl through the school, according to court records.

The former art director for children’s television shows on Disney and PBS Kids met his victim through his daughter.

“Plaintiff alleged that (AWest) was a friend of plaintiff’s family ... and utilized his position of trust to gain access to plaintiff and sexually abuse her,” the case file said.

AWest served three concurrent sentences from 2006 to 2014 in federal prison. He pleaded no contest to two felony counts of committing lewd acts upon a child, and guilty to one count of possessing child pornography in United States District Court, records show.

Department of Justice officials and representatives of the Los Angeles District Attorney’s office were unable to immediately comment Tuesday on the circumstances of the case, and what possible exceptions could apply to allow AWest to live so close to a children’s school, in light of his crimes.

Awest worked as the art director for PBS Kids’ “Jay Jay the Jet Plane” children’s television show at the time of his arrest in 2006, according to the show’s website. He was the recipient of two art direction awards for Disney Channel shows “Rock’n’Roll Mother Goose” and “Adventures in Wonderland.”

Awest also acted as a liaison between Sierra Madre and production companies wanting to film in the area.

(Mod: It will be interesting to see what the Department of Justice and the District Attorney's office make of the SMPD's rather risky call here. My guess is they will have a different opinion …  I have been saying for awhile that Sierra Madre has been remarkably lax in the case of sex offenders like Reid. The fact that the City of Sierra Madre refused to register Bob Matheson as a sex offender upon his return from Canada, where he had pleaded guilty and was imprisoned for possession of a laptop filled with child pornography that he had brought with him from here, is reason enough to raise such questions. In my mind this latest instance of troubling SMPD irresponsibility confirms what many have been saying. Why there is this kind of disconnect is anybody's guess.)

The meeting at City Hall this evening is at 6:30 pm. If you care about this issue you might want to be there.