Better put this one in your "Unbelievable City Hall Idiocy" file. Right next to the one you have on the Civility Party and Josh Moran's denial of having ever known Bob Matheson. We're talking advanced level dumb and dumber here, courtesy of Sierra Madre's City Attorney Teresa L. Highsmith.

Or, as Earl Richey often enjoys calling her, Red.

As I am sure you recall, the news that Sierra Madre's Sex Offender Ordinance had been effectively killed in secret was first communicated to the folks here in town by the Sierra Madre Tattler. I mean, who else here would ever do that? Certainly not Teresa. The article we posted was titled "Question: How Exactly Was Sierra Madre's Sex Offender Ordinance Put On Legal Hold?" and you can link to it here. This really was quite a story, especially for a town such as ours. One that has unfortunately become a kind of haven for these creepy little dudes, and thanks in part to the likes of our highly compensated City Attorney, one where they get to call their own shots.

So you know, Sierra Madre's Sex Offender Ordinance was pulled down in a closed session City Council meeting with Teresa in December of 2013. It was part of a settlement agreement with an organization known as California Reform Sex Offender Laws. Wonderful folks who provide free legal representation to child molesters and other similar forms of hell spawn.

Their lead attorney, Janice Belluci, had beaten the pants off Teresa in court, and part of the settlement was that Sierra Madre could no longer use its Sex Offender Ordinance. It was put into mothballs in December of 2013, and will remain there until the California Supreme Court gets around to deciding if voter approved Jessica's Law is Constitutional or not. Which is a whole other story.

This was a clandestine City Council session, and nobody said anything about it later. A triple dipple secret, one where all of the City Councilmembers must have been specifically told to clam up because not a one of them ever snitched. Neither did City Attorney Teresa L. Highsmith. Security was firmly in place.

Then again, when does City Hall ever tell us anything anyway? They're generally as transparent as mud down there, and about half as personable.

This stayed a big secret from December of 2013 to October of 2014, which is when The Tattler found out about it. Then it wasn't a secret anymore.

The reason I did find out was because I'd been digging around on the CA-RSOL website looking for some useful information about one of City Hall's most privileged child molesters. I didn't find much there about him, but I did discover the shocking news that Sierra Madre had secretly mothballed its Sex Offender Ordinance. The CA-RSOL apparently being more transparent than our own City Hall. Here is how the law firm that provides free legal services to child molesters shared that news (link). 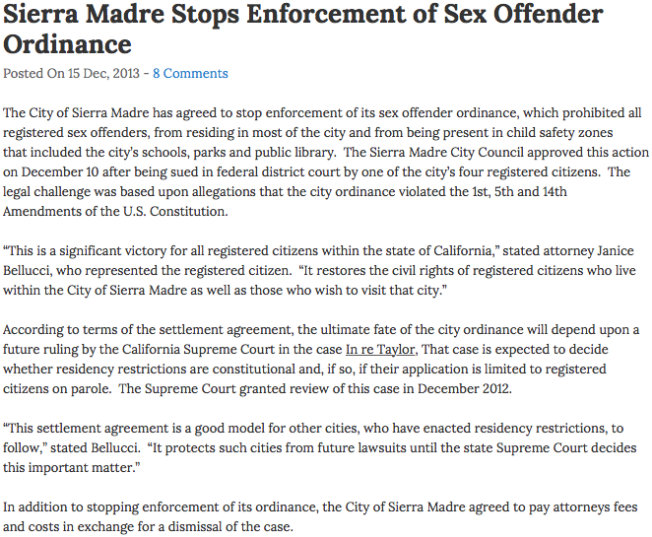 So that is the background. Today's new revelations regarding the atrocious nature of City Hall's record on the child molester issue comes from Teresa L. Highsmith herself. It isn't anything she told us, of course. Red doesn't share anything with the townies unless she is absolutely forced to do so.

Instead she writes about how to properly manage the repeal of a Sexual Predator Ordinance in the October 2014 issue of Western City magazine, which is run by the always murky League of California Cities. The article is titled "The Better Part of Valor: Amending Local Sex Offender Ordinances," which you can link to here.

The piece itself is more about how to deal with controlling public outrage over the loss of certain legal protections against child molesters than anything dealing with the criminals themselves. After all, we do live in a politically correct age where sex offenders are afforded special civil rights protections by the Courts in California, and Teresa doesn't seem too upset about that. At least in this article.

No, her spiel is mainly about crowd control and public relations. Making sure the unwashed villagers don't get too worked up and out of line when they discover there is little to be done when someone who raped a child (as an example) decides he later wishes to live a couple of blocks from an elementary school or playground.

But to me the most unintentionally revealing passages in this article are from the section titled What Can Cities Do Now? Because it would appear that in the case of Sierra Madre at least, our City Attorney, Teresa "Red" Highsmith, did not deign to take her own advice.

Here no blows were softened, nothing was publicized. Only after this blog let Sierra Madre know that its Sex Offender Ordinance had been secretly dropped months earlier did something begin to happen. And even then it took a concerned resident, Deb Sheridan, confronting her directly during a recent City Council meeting, to get City Attorney Teresa L. Highsmith to finally fess up.

No explanatory staff reports were ever prepared that we saw, nor was the matter ever presented to the public in the kinds of special ways recommended in her article. Despite Ms. Highsmith's advice to her League of California City colleagues all we ever got was a terse and defensive one minute reply to a question at public comment almost an entire year after the fact.

All of which seems rather hypocritical of Red. Obviously the people of Sierra Madre are not getting very good legal representation from their City Attorney.

Unless, of course, you're one of our resident child sex offenders. Then your secrets are under lock and key.