I'm telling you, the place is in some kind of crazy fiduciary mess. The Pasadena Unified School District and its missing Measure Y and Measure TT bond money was bad enough. But that was just the PUSD, and people had gotten fairly used to that. No school bond issue since 2008 has passed, and for some very good reasons. They just don't have a record for keeping track of the peoples' money very well.

But apparently it isn't just the school district that leaks dollar bills faster than a Bruce Inman water main. Pasadena City Hall is just as bad. And what we're talking about here is $6.4 Million in hard earned taxpayer dollars that somehow flew out those big green copper doors like so many fleeing bats. With an actual and highly compensated Pasadena City Hall management employee (and yet another leisure-time Pastor no less), the agent of its disappearance.

It is quite a story, and the Pasadena Star News broke it big yesterday afternoon. The article is called "Pasadena ex-employee suspected of stealing $6M in city funds; scandal larger than Bell case," and you can read the entire article by clicking here.

Here are just a few of the juicy details:

Danny Ray Wooten, 51, a preacher, and a former management analyst in the city’s Department of Public Works, was arrested with Tyrone Collins, 55, and Melody Jenkins, 46, a onetime assistant to Wooten. The three are named in a 60-count felony complaint. The allegations include embezzlement, conflict of interest and grand theft.

The alleged public corruption scheme spans more years and involves a larger sum of money than the Bell scandal where officials were caught misappropriating $5.5 million from the city of 35,000 residents.

“Clearly, this is a complete breakdown of our internal controls that would enable that to occur over that length of time,” City Manager Michael Beck said Tuesday.

And then there is this cruel assault on human logic and understanding:

“I am confident, based on what I know about this case, based on my involvement in City Hall operations for over 15 years, based on my day-to-day working relationship with the city manager, that the city manager is well-positioned to deal with this situation and his executive leadership team is fully committed to help us recover a stronger organization,” Bogaard said.

Yeah, right. The very same dudes that were in charge of that afflicted city while Preacher Wooten allegedly smuggled $6.4 million dollars out of City Hall, and right under their snoozing snouts no less, are now going to fix everything. 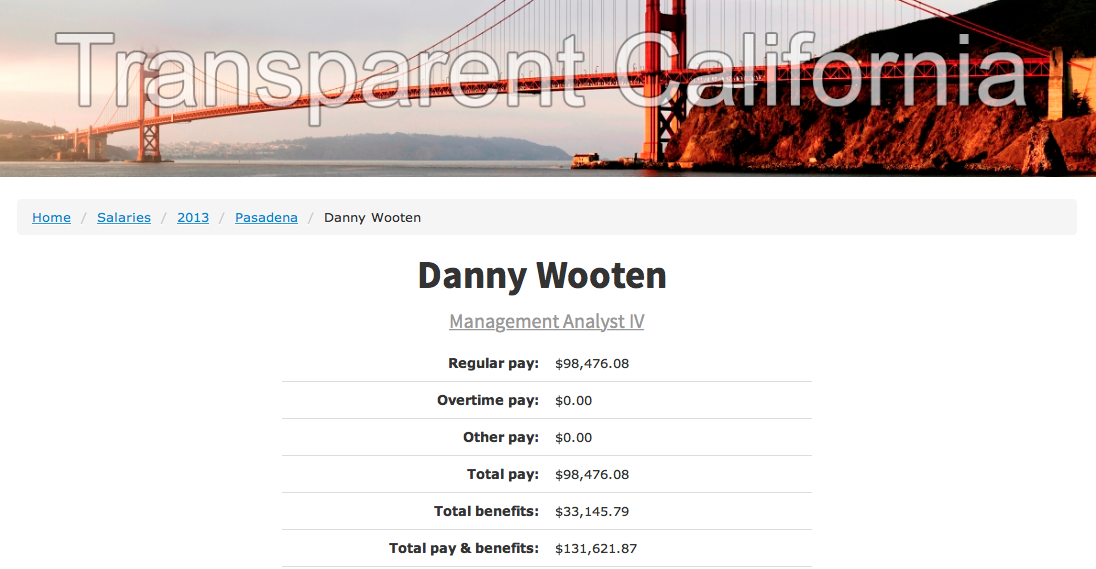 So get this. Danny Ray Wooten was making $131,621.89 a year with benefits included, but that apparently wasn't good enough for him. And the guy was a preacher, no less. Preacher Bling? It appears he could now find himself with over two decades in the pokey to consider that maybe he didn't have such a very bad deal after all.

Read the rest of the Star News article. It is some pretty stunning stuff.

The City of Pasadena just can't get weird enough
Yesterday Frank Girardot, of Pasadena Star News fame, posted this picture on his Facebook page. Frank's implied question, illustrated by this photo, was something like: What is the flag of the Peoples Republic of China doing hanging in the Council Chambers of the City of Pasadena?

It is a good one to ask. A City Council Chambers is not a hotel lobby, nor a restaurant, or even an import car dealership. It is the place where the government of that city, under the aegis of this free and sovereign nation, takes place. Intermittently hostile foreign governments, especially those holding a trillion or so dollars in American debt and far too eager to further expand their influence, should not be represented in such a place of trust.

So what is the flag of the Peoples Republic of China doing there? Here are my 5 New Year's Eve guesses:

- The Chinese government has convinced the City of Pasadena that building the 710 Tunnel is in the best interests of both. It was a deal they couldn't refuse.

- Pasadena needed to peddle some bonds tout suite in order to deal with some of their huge pension driven debt problems. The flag is a show of gratitude to the buyer.

- The City of Pasadena has become an officially authorized vendor for Uncle Sam's Green Cards Inc., which are given to wealthy immigrants in exchange for $500,000 investments in things like the latest round of commercially dubious Pasadena mixed-use so-called green condo projects. The country that bought the most of these passes got to hang their flag in Council Chambers. China won by a mile.

- The PRC now owns enough of Pasadena for it to qualify as a dual citizenship city.

- The United States of America, hoping to pay off some of the $1.3 trillion dollars it owes to China, is handing over desirable California cities as debt payments. Pasadena now follows Arcadia in that category. If the PRC flag should show up in Sierra Madre's Council Chambers as well, then you will know that the deal is complete. The three cities will then be combined into a new governmental entity called Arcamadena.

If you have any better theories, please let me know.

We Wish Everyone the Happiest of New Years!