How Would You Like To Oversee A Few Hundred Million Dollars In PUSD Measure TT Bond Money?

Here is an opportunity to get involved in something interesting that just might make a real difference. That is, if you are a really hard-nosed noodge about it. Apparently the Pasadena Unified School District is required by state law to endure the presence of unpaid citizen volunteers tasked with overseeing how they are spending your $350 million dollars in bond money, raised through the passage of Measure TT by the voters in 2008. And now they have to go out and beat the bushes looking for new recruits for this Citizen Oversight Committee. Oh, the pain! This from the always informative and fun to read Altadena Point (link):

The Pasadena Unified School District (PUSD) is seeking applicants to fill current vacancies on the Citizens’ Oversight Committee, which is responsible for ensuring accountability of work funded by Measure TT, the school improvement bond approved by voters in November 2008. The committee meets regularly to review spending, financial and performance audits, and the efforts of District staff to maximize bond revenues and minimize costs.

Under California’s Proposition 39, school bonds like Measure TT are required to establish Citizens’ Oversight Committees. The committee must consist of at least seven members who serve without compensation and are appointed by the Board of Education for no more than three consecutive two- year terms. School officials or employees, consultants, vendors or contractors of the District cannot serve on the committee. The oversight committee must include the following:

•             A parent or guardian of a child enrolled in PUSD. This parent must be active in a PTA or school site council

You may download an application at www.measurett.org. Completed applications must be submitted no later than 4:00 p.m. on January 6, 2015 to:

The link provided by the PUSD takes you to a lot of photo rich public relations stuff about touring building sites and other fun junkets designed to fill hours that might otherwise be spent doing dangerous things. Like actually looking at how that bond money is being spent. To skip all of that nonsense and go directly to the application itself, click here.

Personally I think this is a pretty good opportunity for the fiscally aware and numerically skilled individual of social conscience to do something really valuable for the community. After all, property owners living within the borders of the PUSD will be paying off Measure TT (with beaucoup interest) for the next half century of so. Somebody with a skeptical eye really should be taking a look at all of this.

While you are there perhaps you could also look into the following mess, which is detailed in this 2008 Pasadena Star News article (link). Apparently nobody knows to this day how it all turned out. Somehow it all just got buried up and forgotten.

PASADENA - A prosecutor who reviewed allegations that a contractor bilked Pasadena Unified School District out of $80,000 said Tuesday the district's records were so confusing, officials could not determine whether a crime was committed.

District officials said the investigation was tied to missing funds from Measure Y, which voters approved in 1997 to fix up schools.

"Looking at the records they had, we could not conclude what work he did and what work other contractors did," said John A. Perlstein, a prosecutor for the Los Angeles County District Attorney's Office.

After reviewing district documents provided to his office by the Pasadena Police Department, however, Perlstein declined to file charges. "They provided the records and we were supposed to guess what was done and was not done," he said Tuesday.

Just so you know the kinds of stuff you might be getting yourself into. Since the PUSD does find record keeping challenging, you obviously will have your work cut out for you.

So where's the "Community Preservation" part?
I was poking around the City of Sierra Madre website looking for something else (didn't find it), when I came across the following somewhat incomplete information. 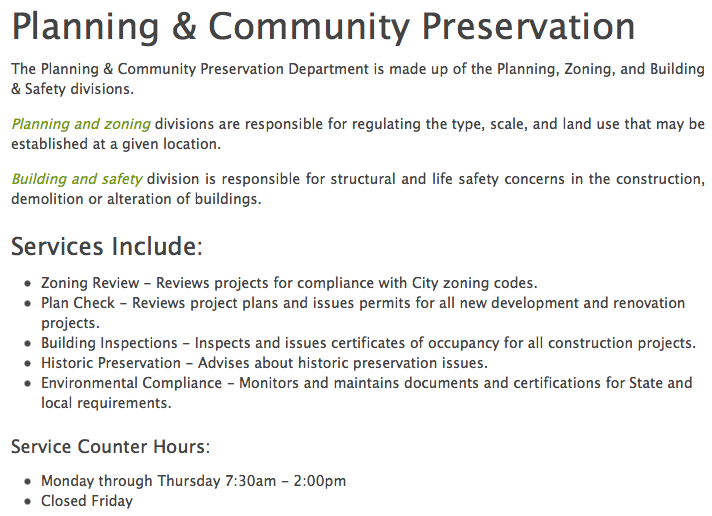 I get all the stuff about "planning and zoning" and "building and safety." But where is the part about Community Preservation? Anybody know?

Sacramento wants you to get over those low gas prices
In case you were not aware, a new gas tax kicks in on January 1st. So don't go getting too used to paying less than $3 bucks a gallon for gas. But you needn't worry, like so many other things the state takes away from you, it is being done to save the world. No, really. This from the Costa Mesa Times (link):

California fuel prices going up as its green-house gas controls hit gasoline, diesel sales - After months of seeing gas prices sink ever lower, Californians will ring in 2015 by paying more at the pump as a result of the state's landmark greenhouse-gas emissions law.

But how much more we'll pay, and whether it's worth it, remains bitterly debated among oil companies, some state lawmakers and environmentalists.

Starting Thursday, gasoline and diesel producers will be subject to the state's cap-and-trade system, forcing them either to supply lower-carbon fuels -- which are more expensive to produce -- or to buy pollution permits for the greenhouse gases created when the conventional fuel they supply is burned. In the short term, at least, that will mean higher prices at the pump, starting almost immediately.

"My understanding from the economists that we've talked to is that it will be very quick, sometime in January -- if not on the first, then shortly thereafter," said Dave Clegern, spokesman for the California Air Resources Board.

Opposition groups backed by the oil industry have claimed prices will rise 16 to 76 cents per gallon, although that's admittedly based on an underlying price of about $4 per gallon -- far higher than recent prices. A UC-Berkeley energy and economics expert says it'll be more like nine or ten cents per gallon, which supporters say isn't so high a price to pay for the environmental good it will do.

So here is my question. How does creating a brand new gas tax (it really is a tax, you know) do any worthwhile environmental good? I'm not certain I see the connection.