I received the following from Robert Fellner at Transparent California.com yesterday. He puts these infographics together and sends them out to the world so people can get a real close look at just how badly out of whack government employee compensation has gotten in certain rather poorly managed cities.

You may recall some of the similar charts he created for Sierra Madre last spring when the latest round of utility tax increases was on the ballot. It is a pretty good service for those who work in the private sector, folks that are often not receiving quite as much in salary and benefits as those supposedly working for them.

I've used the word "supposedly" because in many ways the servants have now become the masters, and you could be working to pay their way for the rest of your life. 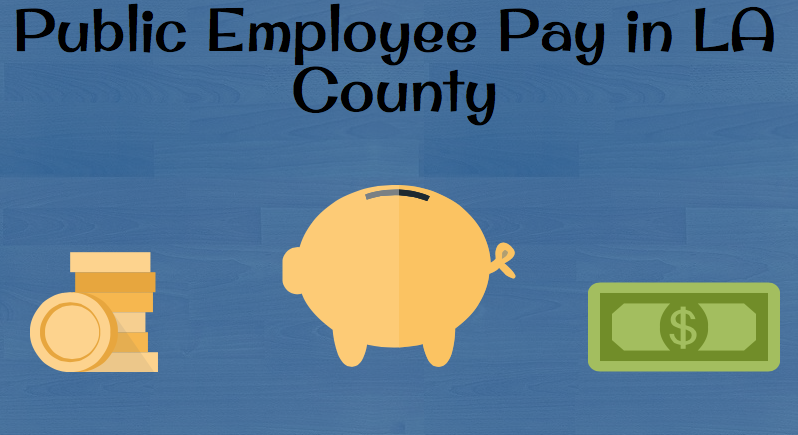 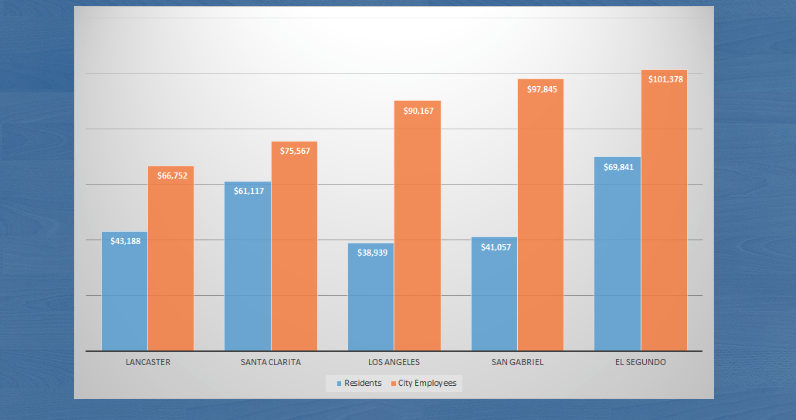 You may also recall that one of the arguments put forward by the City Manager of Sierra Madre favoring employee raises is that what we are paying here is not in line with what other jurisdictions are paying for similar work. And that unless we raised taxes in order to pay our employees more, they might leave.

Which begs this question: How much more than what the average Sierra Madrean makes should we be giving to City Hall employees? You know, like it is done in Los Angeles, El Segundo and other area cities? Is that how good city government is maintained these days? By economically privileging employees above and beyond what the average taxpayer makes?

In 2014 some relatively senior city employees here did actually walk. Former Mayor Nancy Walsh brought this up during her most recent talk to the City Council, and seemed quite irate about it. So now that a month or two has gone by, is it possible to gauge just how much the city has suffered because of this?

I personally have not noticed much of a change. Have you?

Someone who did not have much fun visiting Sierra Madre

Mod: I don't know if you spend much time on Yelp!, but it can be amusing in an odd sort of way. This is a site where the man in the street gets to review whatever his heart desires. Businesses, cities, and anything else. It is all up for grabs, and some of these reviews can be unintentionally hilarious. Here is how a "Yelper" named "Paul R," from Mountain Home, Idaho, reviewed his visit to Sierra Madre.

So I decided to have a nice day off adventure taking the advice of LA Magazine and ride my bike to Sierra Madre with the help of the Gold Line.

After riding up the hill from the station to the town proper I was greeted by a woman with a stroller and baby who I think was texting the cops as I was sitting in the city park.  Apparently I was subject to suspicion for being shady. Not dressed like a hobo I decided there was nothing to worry about and went about my business.

I have been all over the world and have never had a reaction so swift to my just being there. I was leaving the park as a police vehicle pulled up. Luckily I was taking a picture of the town cannon as it drove by me on its way to save the woman from something.

Had a lovely time at Lucky Baldwins with a great group of musicians who I assume play weekly for fun and nothing else. Went to Buccanneer to close out the nite round 7; my old band had played there years before and I wanted to revisit.

Leaving the bar in good spirits I headed home around 8 on my bicycle, which was really the reason I came; to get some exercise and not drive drunk. About a block away from the Old Town I was stopped by a policeman for not having a headlight on my bike. Ok, my bad, I forgot to put it on in my haste to make the ride home.

Basically I was shook down and the guy took my new eighth of grass which I did not have my paperwork for to make it legal and gave me a ticket. Both he and his partner were looking for other reasons to cite me, but as I was still somewhat of sound mind and speech they could do nothing else.

Afterwards, shaken, without the calming effects of my medicine and the many beers at Lucky Baldwin's. I did an almighty faceplant between the town and the station and came up broken and bloody with a nice flap where my chin used to be.

My advice ... don't go to Sierra Madre expecting to have any sort of fun. They have outlawed it and the pod people are coming for you. It is no coincidence that Invasion of the Body Snatchers was filmed there, the brainless and boring are alive and well in Sierra Madre.

See you in court where I will get the ticket dismissed but probably not my grass. 20 miles away from LA there is a town stuck in the 1950s, and I won't be going back. Those times were quaint then but ridiculous now. Stay free if you can.