Next: A Moratorium on the Demolition of Older Homes?

Apparently slow growth mania is now sweeping the City of Sierra Madre. So used am I to a City Hall that seemingly wants to mulch the entire Foothill Village for the purpose of building SCAG housing of one sort or another (you know, to reach our RHNA numbers or some such foul Sacramento state centralized development travesties), or turn downtown into a knockoff version of Rancho Cucamonga meets Walt Disney, that I am having trouble getting my mind around this.

It all seems almost too good to be true, and I can't quite bring myself to accept that this is actually happening. Can it be that maybe the city has moved on in a more resident friendly direction and I am still fighting for things that are a part of the past? Did we win everything and I somehow forgot to notice?

Think about it, the City Council is now moving quickly towards approving a decidedly "slow growth" General Plan and there is NO OPPOSITION to this happening. None. Not one single gnarly old Bob the Builder miscreant wafted out of the Canyon and showed up at last Tuesday's City Council meeting to complain about the abolition of all American freedoms in Sierra Madre because they can't clearcut 100 year old oak groves to build Brobdingnagian bumper buildings on 1,600 square foot lots. A rather unprecedented event that would have been inconceivable just a few short years ago.

Of course, I can take some comfort in the fact that there is a long ways to go before all of the threatened damage is undone. We still haven't resolved the One Carter incursion, or even begun to address the atrocities being planned for Mater Dolorosa or Stone whatever, so there is still some continued relevance here for barricades thinking. But I have to tell you, the prospect of victory and the resulting peace that could follow does have me feeling a little nervous.

You can learn interesting things by checking out the City Manager' Report. I look forward to reading it each and every week, and much to my delight it showed up a day early this time around. And it did not disappoint. Check this revelatory little item out.

And then, just a paragraph or two later:

Be still my troubled heart. It is one thing to call for a special meeting to move the General Plan along, but a "Moratorium on the Demolition of 'Older' Homes" as well? Where oh where did that one come from? Dare we dream this is true?

There is a precedent for this, of course. Both Pasadena and Monrovia have done some similar sound thinking. Monrovia as recently as last month. Something that we ecstatically posted all about here.

There is a pretty good agenda report out of Monrovia, and I will cut and paste a portion of it today. You can view the whole thing in its native locale by clicking here. 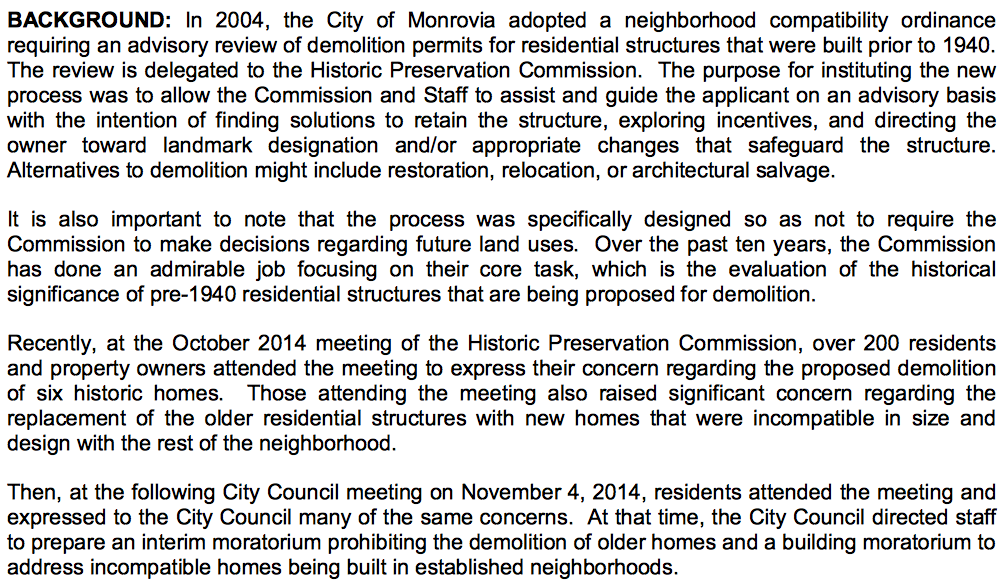 What all of this appears to indicate for Sierra Madre is City Hall now believes that we need an interim plan for preserving the town until the refreshed General Plan comes on line in the hopefully not too distant future. As is the case in Monrovia, the method for doing such a thing is to prevent fine old homes from being torn down in order to accommodate those kinds of outsized Rose Hills mausoleum looking barns currently erupting all over Arcadia like a really nasty flare up of teenage acne.

One more happy thing
It appears that the "captcha" box that was popping up when you commented is gone. Don't know if this is temporary or those fine folks at Google took my pleas to heart.

We are now free to be you and me.