Tonight's City Council Meeting Is Mostly About One Thing Only: The General Plan Review

It's better late than never I suppose. Though why this 18 month General Plan Update "process" is now entering its sixth year of, um, processing, is a troubling one. With more to go, I might add. As you can visualize from our helpful picture to the left, it took the dedicated foot dragging of our previous four Mayors to make this happen. Each of them could have pushed this thing through, but for some reason they chose not to do that. At times quite loudly (link). Anyone care to speculate why? My guess is it has something to do with enabling development. You know, such as the McMansion variety now coming down at One Carter, Mater Dolorosa and Stonegate.

Here is how this evening's exercise in reviewing is previewed in the accompanying Staff Report: 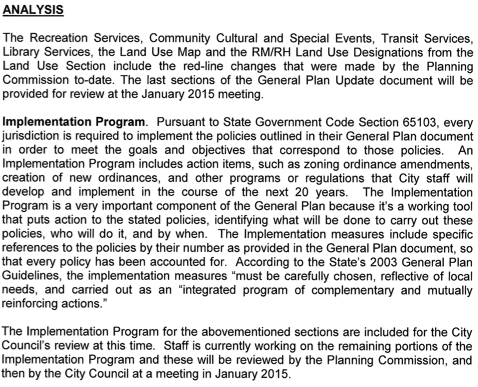 If you think about it, when this General Plan Update is eventually finished it will have taken a full 40% of the twenty year period it was supposed to cover to complete. Is there a Guinness Book of World Records category for such a thing? The World's Longest General Plan Approval Process perhaps?

So when exactly will this completion happen you ask? Nobody quite knows for sure, though another two years has been cited by some. More or less. There is an Environmental Impact Statement to be completed, and that involves a very expensive consultant. One that has never been averse to the goals of the four individuals pictured in the upper left hand corner of this post.

And yes, there are consequences to these seemingly endless delays. Severe ones. The difficulties at One Carter would have to be among the foremost of them. Because had the updated Land Use Section for this latest iteration of the General Plan been in place back in 2011 when originally scheduled the difficulties we are having with CETT today wouldn't have even come up.

The necessary land use guidelines would have been clearly drawn and in place, and what they are attempting to legally foist upon us now could have been brushed aside so easily CETT probably wouldn't have even come here in the first place.

Should the 610 Baldwin Court matter end up going to trial, which in my opinion it will, and should we lose, the legal costs to the taxpayers of this town could be in the hundreds of thousands of dollars. If not more.

And should City Hall lose that lawsuit we would not only have to pick up CETT's legal costs as well, but could also be forced to relinquish planning control over the remaining open foothill areas on the north side of town. Resulting in an out of control McMansionizing of the most visible (and vulnerable) portions of our community.

None of which would have happened had the General Plan Update been allowed to go through in 18 months as originally planned. Instead it was deliberately delayed by a complicit City Hall far more concerned with the revenues it would receive through massive development impact fees than the wishes of the citizenry whose taxes pay their salaries.

As I said, should Richie McDonald and his mysterious client prevail in court, the consequences could be devastating for this community. And it isn't just the money. We would also lose the ability to control the planning and development of our own community, and in the process end up with a Sierra Madre you wouldn't even recognize.

Sometimes these things really do count. See you tonight.