There is a small item in yesterday's City of Sierra Madre "e-blast" (as opposed to maybe a far milder e-zephyr? Or an e-pat-on-the-noggin?) that begs for a bit more attention than it was given there. Here is that wee piece of foggy information for you: 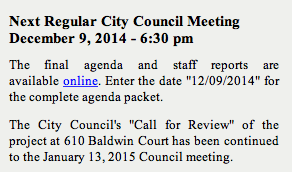 First off, a helpful jargon alert. By "continued" the author of this pithy piece of vagary actually means the meeting on this matter has been delayed for some unexplained reason. Or kicked down the road for a piece. Or pushed off to next year. Delayed so a bit of monkey business can be get done behind the scenes might be another fun way of putting it. That is, if such is your point of view.

Oh, and as of this typing last night the "complete agenda packet" was not "available online." So you e-blast recipients shouldn't go wasting too much time poking around the city's website just yet.

The final episode of the "Call for Review" regarding CETT's illegal McMansion designs on our hillsides was supposed to take place next Tuesday evening. Hopefully with a rejection of this project along with an expressed invitation to pack up their tedious PowerPoint presentations and rude lawyerly insults and start leaving us alone by the end of the year. If not sooner.

However, apparently that is not to be just yet. This despite all of the purposeful and bold talk by the City Council at the last meeting. Since that golden moment in time there apparently has been many a conversation going on that we are just not privy to yet. All done in the hopes of bringing things to some kind of an amicable agreement I'm sure. Something that will avoid lawsuits and create a new kind of love between the city and CETT. And then we'll all go off and celebrate the Christmas holidays.

Which you can probably translate into simply meaning something is going to get built at One Carter. And then a whole lot more.

I did receive a few emails about this yesterday, but none more informative or insightful than this one:

I was notified by Elaine that the next meeting that will discuss the "Review" of One Carter was postponed until January 13th, to give the city council a chance to meet with the developer and for the subcommittee to make their recommendation so the decision may already be done before that date.

Since we are going on little hard information for the actual cause of this "continuation," we're just going to have to speculate about it a little. Attempt to shine some light into the infinite opacity of it all. Something we enjoy doing here at The Tattler office suite. Which is the dark purple couch to the right of the TV located nearest the kitchen.

The City Council, or at least its pettifogger Mayor, does not want to vote on any houses at One Carter. Never, and not a one. To do so is to risk being put into position of becoming one of the handful of people responsible for setting the McMansion plague loose upon what until now has been our Foothill Village.

Trust me, any persons responsible for doing such a thing run the risk of being talked about in the most uncivil of terms, and for all times. Mad dogs will be named after them. New species of rattlesnakes as well. That sort of thing.

So there could be a deal in the works. A behind the scenes fix that will be presented at the January 13 City Council meeting in the most glowing of terms. A grand compromise as it were. Or perhaps a reaching out across our many differences to forge an understanding that will benefit us all. That sort of malarkey. Or, if you are Lawsuit Richie, self-serving BS.

At which time it will all be tied up in frilly bows and pretty paper and "continued" on over to the Planning Commission for a cursory and polite rubber stamping. With a Colantuono lawyer present in case there are any awkward questions.

You could call it a "vote-free" approval. Or a fix if you are prone to earthier skepticism. Which early indications show is now in. Otherwise the City Council would have just voted this mess down tout suite next Tuesday evening. Right?