Robert Spencer, the author of several bestselling books on the topic of Jihad, or Islamic Holy War, and the threat it represents to our country in these present troubled times, came and spoke to a fairly large group of people at Memorial Park during this year's VFW Veteran's Day ceremony. At long last the video has become available, and as promised we're providing you with a link to it. If you weren't there and missed this speech, you should check it out. As you may recall, there was some fairly lively controversy about this appearance, and our notice of Mr. Spencer's speech drew some heat from several commenters. In certain quarters these are contentious matters, and there are those who would prefer they not be discussed. We did, and took a bit of criticism for it. Which is fine. We welcome that sort of thing at The Tattler.

To link to the video of Robert Spencer's talk here on Nov. 9, click here.

Can you be fired for doing “The Chicken Dance” at work?
This comes from the legal website Lexology, and it discusses a workplace right that you might not have known you have. At least if you live in Australia.

It is challenging to find a blog idea involving employment law and turkey (search engines come up with articles on the employment laws of Turkey).  So our labor law lesson of the day involves chicken instead, and comes from Sydney, Australia, where you can’t be fired, it seems, for an allegedly intimidating workplace performance of “The Chicken Dance.”

The employer, Harbour City Ferries, discharged a 51-year-old male employee and cited as one of its reasons that he had performed “The Chicken Dance” as an intentional act to intimidate, harass, or otherwise harm another employee, as reported in the Sydney Morning Herald.

But a labor appeals commissioner for the Fair Work Commission ruled recently that the employer went too far.  He ordered the employee to be reinstated, determining that the stated reason “was fanciful and did not represent reason for dismissal.” Rather, the employee should have received a final warning for other behavior, which reportedly included making “a highly inappropriate racial insult” to another co-worker in the lunchroom.

The commissioner found fault with the employer for its investigation of the employee because the employer accepted the word of other employees and may have discounted the employee’s side of the story because he had “a somewhat disagreeable” demeanor. “Even unpleasant people are entitled to justice,” the commissioner said, according to the newspaper report.

You can read the rest by clicking here.

A Big Rain Storm
It has been a long time since we have been able to read something like this. Last February to be exact. And in the middle of the most severe drought in memory it has got to be seen as a welcome event. Flash flood warnings and all. The news below is from the National Weather Service. 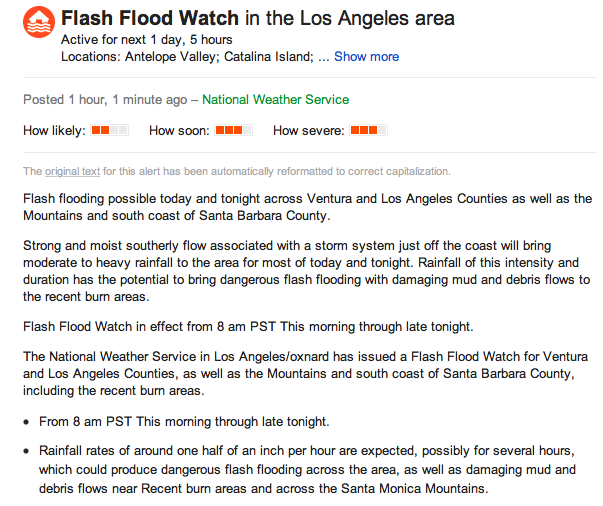