We interrupt today's report on the ongoing water crisis here in Sierra Madre to bring you the following breaking news … This from Encinitas Undercover (link): 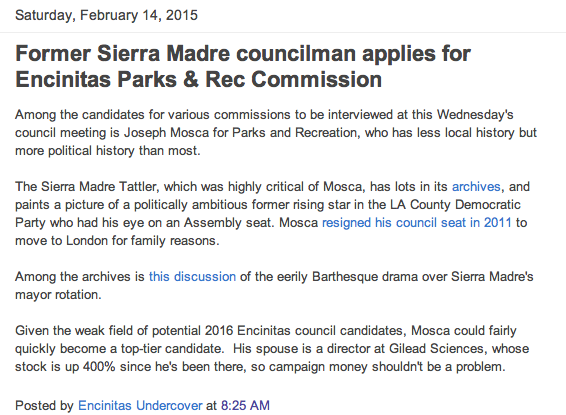 EU notes that Joe Mosca does not have a lot of history in Encinitas. Of course, that hardly stopped him when he moved here.

We now return to our regularly scheduled programming …

City Staff put out a press release to celebrate what I guess was a big victory for them. Or at least to deflect a little of the blowback from Tuesday evening's less than stellar performance before the City Council. An event that clearly showed they just did not have their act together. Or perhaps they just want people to know that now they're actually communicating.

This press release has so far been seen on the City's Facebook page, where it has received 3 likes (including one from the the Chair of the EENER Commission), and on the Sierra Madre News.net website. No comments from the readers there yet, though they usually are a quiet bunch on that site. Here is what it says:

City to Impose Penalties for Excess Water Usage - Please note that at Tuesday’s City Council meeting, the City Council directed staff to begin charging water penalties to customers that exceed their water conservation target numbers, beginning on the July (for the water usage in May and June) and August (for water usage in June and July) water bills. Please look for more information in your March and April water bills.

I'm not sure that this is quite a done deal yet, however. Councilmember John Capoccia, the fellow who ran for his City Council seat as a tax fighter, only to later become a helpful friend to every tax, rate and fee increase imaginable, was quite insistent on the quick institution of penalties for residents who use too much water. To do otherwise would be to appear soft, or something. Government that does not take money from residents, and as often as possible, apparently being a sign of weakness for this Councilmember.

And while it is true that there are some water hogging knuckleheads out there ruining it for everybody else, it isn't the people having trouble keeping their water usage below 12 units that are the problem. Though they certainly do seem to be a target for some reason. Could this also be a part of that "perception of weakness" problem?

So did this press release jump the gun a little? If you go to the latest City Manager's report on the City of Sierra Madre website, you can see that the item is up for City Council discussion again at the Feb. 24 meeting. Here it is listed as the final consent calendar item.

The reason why the "excess water usage" matter has to go to a vote on Feb. 24 is because nobody is completely certain what those penalties are going to be yet. And while the "appearance of weakness" factor obviously plays an important role for some, the fact remains nobody has worked up anything that can actually be used yet.

Something that in my opinion also gives an appearance of weakness.

No penalties are going to happen until city staff finally figures out what they will be, who will actually get penalized, puts it all down on paper, and the City Council votes to approve whatever it is they've  finally come up with. After all, you can't have an ordinance without any words in it.

And the City Council could alway reject whatever city staff does come up with, especially if it is as bizarre as that last batch of nonsense they were pushing. Then send them back to the drawing board all over again.

But there will be penalties some fine day for water abuse. Have no doubt. Hopefully it will be after the drought is actually over in a decade or two. For now, however, you'll just have to "look for more information in your March and April water bills" to find out what is up. A little after the fact, but that does buy the city some extra time to clean up the mess.

Those fighting to preserve Sierra Madre from the community wrecking effects of vast quantities of embezzled foreign capital, along with the machinations of those local noisy fifth columnists who are so slavishly eager to betray this community in order to serve that cause, will want to be ready on Feb. 24 for this one:

I'm sure the McMansion development riff raff will be out again in force for this one. It is always amusing when people with a few million bucks in their bank account try to portray themselves as victims. The hyperventilating and hysteria alone are worth the price of admission.

Oh, and be sure to check today's Looney Views News and make certain this public notice is actually there. You know how that one goes.

There is also this unfortunate little number:

Why anyone would want to run the risk of having our City Council elections, along with the intimate community conversations that are so much a part of them, drowned out in the insane howling roar of what presidential elections have become in this country, is beyond me.

And do we really want to run the additional risk of having our non-partisan City Council elections swamped in the garbage pumped out by the two major parties?

Unless, of course, there are some people who would prefer that those conversations not take place.