The Planning Commission has a big task tonight, and it took a little time for it to get to them. This evening's meeting was supposed to take place two weeks ago, but because the overworked and increasingly desperate employees at Sierra Madre City Hall, taxed to the very limits of human endurance by the hundreds of staff hours that must be put into the planning and execution of such things as the Huck Finn Fishing Derby and Campout 2015 (link) and Sierra Madre Older American of the Year Nominations (link), plumb forgot to send the public notice ad to the city's adjudicated newspaper, the Looney Views News. Meaning this vital and urgently needed meeting could not legally take place as originally scheduled.

Here is how this meeting was eventually announced on the City of Sierra Madre's website. Note the complete absence of any mention of that unfortunate error.

So much for transparency. Over at the Looney Views News itself there was also a similar absence of reporting on the City's rather strategically misplaced gaffe. 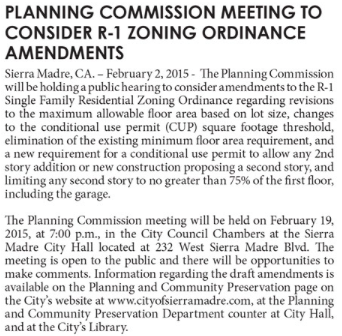 Of course, that is because it is the very same thing that was posted to the City of Sierra Madre website. In this town news is often presented to the citizens in the form of carefully constructed public relations releases, complete with any information that might be inconvenient or potentially embarrassing to the local government agency scrubbed from the record.

That this is accomplished through the use of tax money at both ends of the transaction not only shows some studied coordination on the part of both parties, but also displays just how willing they apparently are to keep the actual truth about things from you, the person paying for such awful and deceptive service. Fortunately few people actually care and life goes on as it so often does, in the halting and ineffectual fashion that most are willing to accept.

There is some good news however, and that is the Pasadena Star News got it right (link). Not about the screwing up of the noticing, of course. Nobody cares too much about that, no matter what the consequences might be. But on how exactly it could go down at this evening's meeting. Check it out.

The proposed amendments under discussion concern revisions to the maximum allowable floor area based on lot size, changes to the conditional use permit (CUP) square footage threshold, elimination of the existing minimum floor area requirement, a new requirement for a conditional use permit to allow any second-story addition or new construction proposing a second story and a limiting any second story to no greater than 75 percent of the first floor, including the garage.

“The City Council asked us to (make these amendments) because of the drought situation in this area, and then it has grown into other related issues,” said City Manager Elaine Aguilar.

Residents have raised concerns that developers will build large-scale homes that take away from the small-town feel of the city and in some cases affect the hillsides.

The article also gives a some serious ink to the Preserve Sierra Madre group, along with the guy who keeps this diverse group of people properly herded, Matt Bryant.

In a letter to the Planning Commission earlier this month, the community group Preserve Sierra Madre proposed their own changes to the ordinance.

“Lowering the floor area limits and conditional use permit thresholds will help preserve our village character and save residents from some of the burdens of overdevelopment,” stated the letter.

Resident Matthew Bryant, a member of the grassroots group, said a majority of residents are concerned that the mansionization that is happening in Arcadia could eventually spread to their town.

“These are all battles that several cities are dealing with right now. We’re not a group that’s opposed to all development,” said Bryant, who moved to Sierra Madre from Altadena a couple years ago because he loved its quaint appeal.

“We’re opposed to developers coming in and trying to make as much money as possible by building these large homes, and they’ve now changed the complexion of a neighborhood,” he said.

I guess we'll see how this all works out tonight.

One more thing. A few weeks back we ran a series of photos that showed just how decrepit that story pole McMansion erected at One Carter by the rather snotty developer CETT had become. Complete with broken boards and rusted nails scattered about in an insouciant fashion. As you can see from the photo the P'dena Star News posted along with the above article, nothing much has changed. 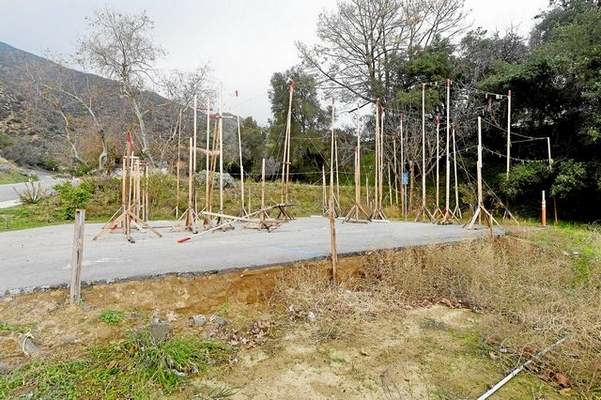 Allow me to ask you something. Let's say you had something like that miserable mess in your front yard. Do you think that there is at least a possibility that someone from the City might stop by to let you know that such a thing is unsightly, and also possibly dangerous to the neighborhood kids and pets? And that maybe you should clean up your mess?

After all, you're not a developer that City Hall hopes to do business with some fine day.