Mod: Here is an interesting article that ran on a site called loscerritosnews.net (link) a couple of weeks back. It deals with an "Anthony Portantino For State Senate" website that apparently was not ready for prime time. Anthony is running for Carol "Lookie" Liu's soon to be vacated State Senate seat, and I am sure he does not need this kind of aggravation.

The investigation revealed that after Portantino termed out of the California Assembly in 2012, he commissioned a “webmaster” to build the site and began uploading the false endorsements, subsequently sending supporters to the site to create a “snowball” effect.

A  “WHOIS” search shows that the web address, va4ndor.com, is registered under an Elliot Cuite of Duarte.

After a few phone calls placed by HMG-CN to officials listed on the website, it became apparent that the falsified list of endorsements and statements was staggering even to the most seasoned political veteran.

A Google search using the term “Anthony Portantino Endorsements” sends the user to the website http://va4ndor.com/anthony-wp/endorsements (Mod: since deleted) listing over fifty endorsements and statements.

The bottom of the website indicates that it is, “Paid for and authorized by Anthony Portantino for Senate 2016, ID# 1334175.”

One of the first endorsements is by Sen. Darrell Steinberg talking about Portantino’s integrity. Steinberg presided over the chamber while three fellow Democrats were suspended. “I have worked with Anthony on foster care issues, stem cell research and good government reform. He has great conviction and integrity and I would be very pleased to welcome him to our Democratic Caucus. He has my complete trust and support.”

Mod: You can check out the article by clicking on the link above. The website we're discussing was deleted shortly after the original article appeared, but a screenshot does exist. It is extremely long, so we are only posting the top portion. To link to a PDF of the entire site, click here. 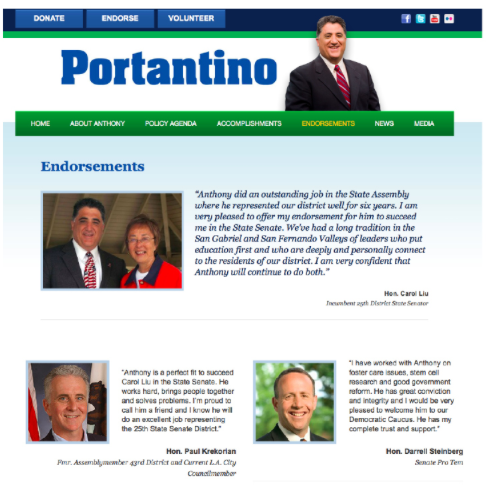 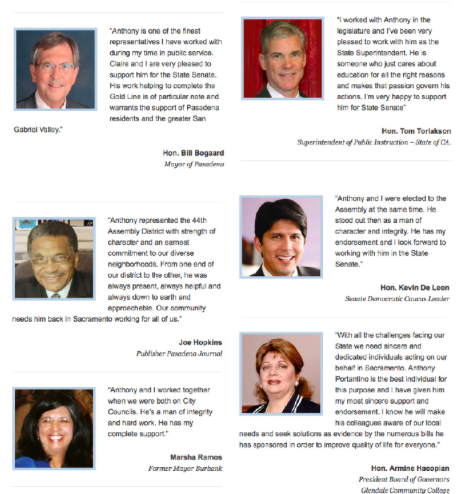 Mod: Naturally Anthony Portantino did not enjoy this kind of adverse exposure, and he replied by sending out the following e-mail with his explanation of what happened.


Mod: I can certainly understand Anthony's embarrassment here. However, in the age of the Internet you do not put up things such as this without running the risk of at least some adverse exposure.

One more question. If Anthony didn't release this as he says, how did it go live in the first place?

Posted by The Moderator at 6:00 AM