So How Did The Teachers' Unions Hand Pick Its Candidates For This Board of Education Election?

It was a relatively easy process. They invited their potential candidates to a big dinner and then had a beauty contest. Well, OK, they're not exactly beauties in the Miss America sense, but I am sure they know how to take orders and smile. And in the discerning eyes of the California Teachers Association (CTA) and the United Teachers of Pasadena (UTP), obedience is at the very heart of perceived loveliness. They're not exactly turned on too much by spontaneity or original thinking.

Here is the invitation. It went out to all union teachers in PUSD Districts 2, 4, and 6. 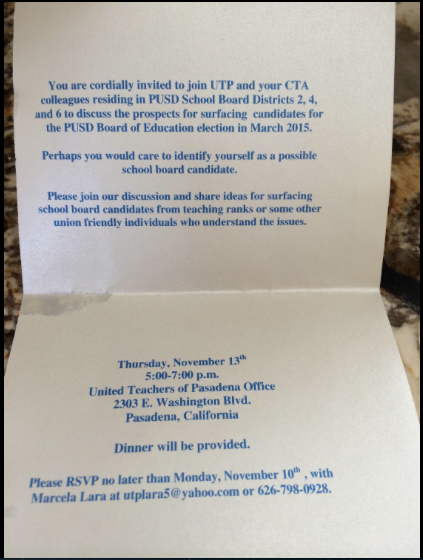 This was a mass mailed "special invitation" to all of the UTP and CTA members (public school teachers) who live in the areas represented by these three particular PUSD seats. They are the even numbered district seats where taxpayers were denied the right of the vote for two years. This by the likes of Ken Chawkins, Bart Doyle, Joe Mosca and the rest of the Mayberry Mafia that ran the so-called "redistricting process."

Taxation without representation is what people in our country called this at one time. Do they teach that sort of thing in PUSD schools any more? You still pay the taxes of course, but they took away your vote for two years anyway. 2015 is when they graciously gave it back, and even supplied you with candidates.

It is important to remember that these are the same people who have now endorsed the candidacy of Larry Torres.

The purpose of the invitation to this teachers' union "candidate surfacing" dinner was not to sell the attendees a time share, or even the chance to win a 3 day all expense paid cruise ship experience to the Bahamas. This was an attempt to find "union friendly" candidates. That is, people who will do exactly as they are asked by the unions in exchange for an endorsement, some money and other forms of campaign support.

Here is how one observer put it:

The teachers' unions send out letters to all candidates for public office (school board, city council, etc. ) and offer endorsements and money. The catch is, to receive these items, the candidate must sign a document stating that they will support (by their votes when in office) things that the teachers' unions support. It is very transparent vote / influence buying. Why would anyone with an ounce of integrity sell his soul to these unions? How could anyone in the public have any trust for anyone who has the endorsement of these unions?

Larry Torres received his invitation in the mail because he is a California Teachers Association member. Apparently he went to the dinner with hopes and dreams.

Larry Torres became a potential candidate after attending this soiree, and then had further meetings with the United Teachers of Pasadena to seal the deal. He must have promised to be their extra special boy once he is on the Board of Education, because they gave him their endorsement and set him up with a several thousand dollars in postcard money. Torres is their creature. They hand-picked him, are helping to pay his bills, and he will vote as they tell him to vote if elected.

They also hand-picked similarly pliable candidates for Districts 2 and 4. Here is how this is all stated on the United Teachers of Pasadena website (link).

Here are screenshots of the three candidates who emerged from this beauty contest selection process. All three were specially chosen by these two teachers' unions. They were hand-picked by them to run for the Pasadena Unified Board of Education.

Should things fall apart next Tuesday and the above three all be elected, they will be the guys making all of the PUSD decisions for your kids. Hand-picked by people who really don't care too much about you, or what you might believe is right for your children. They have other agendas, for other people.

These three will cast their votes for whatever the California Teachers Association (CTA) and the United Teachers of Pasadena (UTP) ask them. The folks who got them there will continue to have an undue amount of influence over these Board of Education members.